The blossoming seeds of resurrection in a vital congregation

Instead of dying, church lives by getting involved in its neighborhood 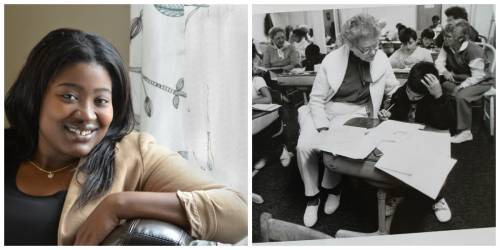 Despite being part of the same church family, Hazel Pflugmacher and Jaquette Easterlin never met.

“I’ve heard a lot about her,” Easterlin said. “She was a big part of creating a place where I could go and be loved on.”

The place Pflugmacher and others helped create was in a dingy, old church basement in Tacoma, Washington, where Easterlin now works. In 1987, the year Easterlin was born, Trinity Presbyterian Church was down to 25 members — in a neighborhood caught in the crossfire of drug trafficking, gang violence and poverty.

The church was near Bryant Elementary, which, at the time, had the highest free and reduced lunch enrollment in Tacoma. Pflugmacher — one of Tacoma’s first female school principals — learned from a friend, the principal of Bryant Elementary, that the school needed help.

Eighty years old at the time, Pflugmacher recruited other retired schoolteachers. Together, with other Trinity members, they started a reading and mentoring program for first- and second-graders at Bryant. Easterlin began participating in that program six years later. 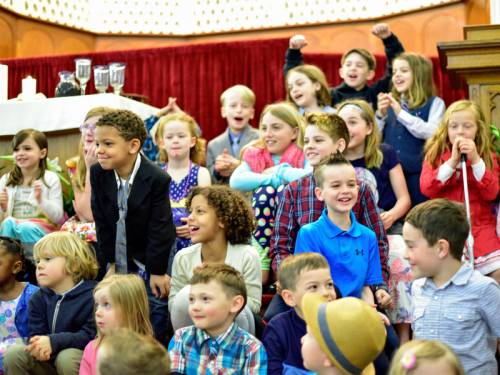 “It was my first connection to Trinity,” she said. “The first thing I remember is fun. It was a place where I could be a kid.”

The Bryant after-school program was a turning point for the church. As children came to Trinity, relationships formed with others in the neighborhood, and that led to a weekly soup and conversation ministry.

“The seeds for resurrection were planted — and they have blossomed,” said Trinity’s current pastor, the Rev. Matt Robbins-Ghormley.

By the early 1990s, with the help of University Place Presbyterian Church, Trinity added a medical clinic for those without health insurance. Easterlin’s grandmother took her there when she needed health care.

“It was this incredible group of older adults who thought they were young,” said Kevin Hunter, whose family with small children was one of the first to join Trinity in the early ’90s — and experienced the turnaround.

“Under Rev. Lynn Longfield’s leadership they became so open to incubate collaborative partnerships so that mission could happen in the neighborhood.” 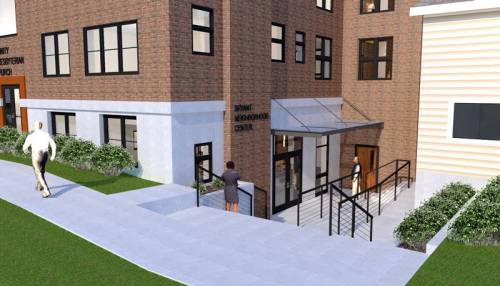 Impressed, Hunter and his wife, Kim, went to two other young families, with two or three kids each, and asked them to come to church with them. Suddenly the membership had increased by six adults and seven to nine children — and tripled the youth group.

Hunter initially worked for Young Life ministries — and then for World Vision, which awarded a $100,000 grant for work being done in the neighborhood by Tim and Anna Herron, who had started a learning center for kids in their garage.

What would become Trinity Learning Center at Jason Lee Middle School was initially open to the kids they knew — including Easterlin, who lived five houses down from them.

In 1998, with the help of the Northwest Leadership Foundation, the Herrons created structure and funding for Acts Six scholarships for promising urban leaders. Easterlin received one of the scholarships.

Easterlin is grateful for Trinity providing a place of refuge for her.

“I was accepted there. I didn’t have to worry about anything else,” she said.   “It’s the same for kids today. I try to create fun for them and keep them focused in the moment.

I get in the muck with people, to support and love them, regardless of where they are.”

And that’s what 25 members at Trinity were doing in 1987. Many, like Pflugmacher, who died in 2003, are no longer physically present in the congregation, but their spirits are alive.

“She was a passionate visionary who wasn’t afraid to speak her mind,” Hunter said. “She kept us focused on what God wanted us to do as a church.”

Trinity’s membership is now over 200.

In April construction will begin on a new Bryant Neighborhood Center in the church basement, which is part of a $4.7 million “Here for Good” campaign.  The church has received $1.16 million in pledges from Trinity members and another $1.5 million from community partners, including an anonymous $1 million gift.

“I’m now a kindergarten teacher at Bryant,” Anna Herron said. “I have kids of parents I worked with when they were in middle school. There is so much trust now, thanks to Trinity’s engagement in the neighborhood over the years.”

“At Trinity, my kids saw old people being kind to people suffering from mental illness and drug addiction,” Hunter said. “They experienced what it means to be the salt and light in their community. I’m eternally grateful.”

Gracious God, we give you thanks for those whose sacrifices make life better for others. May we welcome others, as you have welcomed us, with loving hearts and embracing arms. Amen.