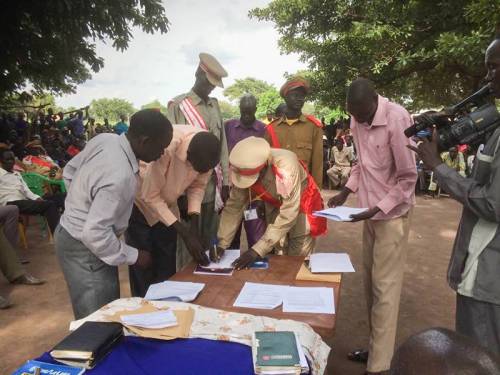 When soldiers are seeking to reclaim lost territory, they have little regard for the peace agreements signed by their national leaders. That’s why the grassroots work of the Rev. Peter Tibi and PC(USA) partner RECONCILE is a critical component of South Sudan’s fragile peace process.

Tibi is the executive director of RECONCILE, which was created by the New South Sudan Council of Churches to bring peace and healing to communities hurting from decades of war. The Reconcile Peace Institute (RPI), one of three RECONCILE programs, brings leaders to the campus in Yei from around the country and strengthens their skills in resolving conflicts and recovering from trauma. Mission co-worker Shelvis Smith-Mather is the principal of RPI. But RECONCILE staff also go into communities affected by violence and mediate peace agreements and facilitate trauma healing as well as teach civic education, good governance, democracy and conflict transformation.

Tibi, along with community leaders, government officials and representatives from the United Nations, recently met with five clans in Douncy County, Gok State, South Sudan to end hostilities and begin the process of reconciliation. The clans have a history of conflict over cattle raiding, water sharing and revenge killings. They took an oath to tell the truth, accept wrongdoing, apologize and commit to reconciliation and co-existence. The death perpetrated by both sides numbers in the tens of thousands. But this time, soldiers wore signs around their necks that they had surrendered their weapons. The guns were carefully placed on the ground in staggering numbers. 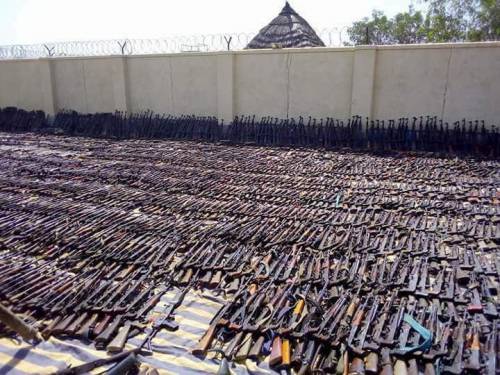 Another peace deal was signed by South Sudan President Salva Kiir and rebel and former Vice President Riek Machar on June 27 in Ethiopia. That was not the first time they’ve come to the table together. Peace deals signed by both leaders have fallen apart in the past.

Under the threat of international sanctions, Kiir and Machar also signed a peace agreement in August 2015. Machar returned to Juba in April 2016 and was sworn in as vice president. Just three months later, violence broke out again between the two factions.

The people of South Sudan are also threatened with an epic, man-made famine. Opposing forces more often target civilians rather than one another. In South Sudan, they have raided cattle and burned homes and fields. Because so many have been forced to flee, people cannot plant crops or must abandon them.

Estimates are that thousands face immediate starvation and more than 1 million are in danger.

“We need to help people not only embrace the peace but build the capacity to maintain peace,” said Tibi. “This includes trust-building activities, trauma healing and training. People need to understand the peace agreement and be able to address their concerns.”

Last December, Tibi traveled to the same area to meet with the clans to prepare for upcoming reconciliation talks, bringing together women’s groups and youth camp leaders, as well as chiefs and commissioners.

“Reverend, you came in peace and you will go in peace,” they told him, even offering traditional blessings, but fighting broke out in a neighboring community and Tibi left in an armored convoy to travel to the airstrip. His vehicle made it safely through a village that had just been burned to the ground. The convoy was fired on and some people died. He made it back to Juba and the government declared a state of emergency and forced disarmament followed.

The South Sudan Education and Peacebuilding Project partners with RECONCILE in peacebuilding activities and longtime PC(USA) partners, the Presbyterian Church of South Sudan and Across, to train teachers and strengthen Presbyterian schools, including those in Pochalla and Pibor, two rural and inaccessible areas of the country.

Mission co-worker Leisa Wagstaff has been going to rural areas and even traveling to the refugee camps to help teachers gain the necessary skills to help children heal from a lifetime of trauma. In a recent two-day gathering, a program of the Presbyterian Church of South Sudan’s Education Department provided activities for children to participate in trauma healing.

“We laughed, played, shed tears, journeying through some painful remembrances and harsh realities and celebrated the promises that God has given us,” she said.

Merciful Father, Son and Holy Spirit, embrace your witnesses in South Sudan, protecting them and giving them courage. We pray that this unique partnership would thrive under your care. Please keep the partners close to you and close to one another as they grow in faith and service. Amen.