Pilgrims gather in Amsterdam to celebrate 70 years of global ecumenism 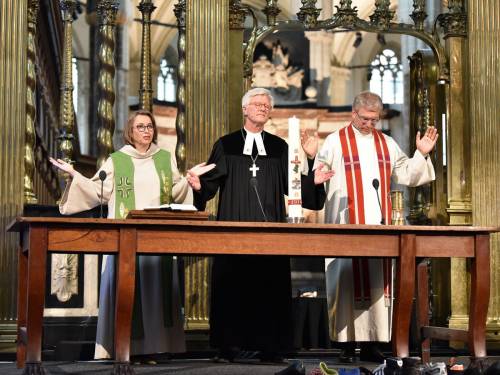 Hundreds of people gathered from across the world for an ecumenical prayer service at the Nieuwe Kerk, a 15th-century church in Amsterdam, to celebrate the 70th anniversary of the World Council of Churches (WCC) at the very spot in which the organization was founded.

Under the theme “Walking, Praying and Working Together,” the Aug. 23 service featured special music, greetings from the Council of Churches in the Netherlands, and a procession of pilgrims from all over the world. WCC general secretary the Rev. Dr. Olav Fykse Tveit offered a sermon, and Dr. Agnes Abuom, moderator of the WCC Central Committee, led the congregation in prayer.

A “Walk of Peace” through Amsterdam was also held beginning in the Hoftuin of the Protestant Church in Amsterdam and ending at Dam Square. During the week preceding the service, a Youth Pilgrimage gathered Dutch as well as international youth for an ecumenical experience.

Looking back – and forward

In his sermon, titled “The Love of Christ Compels Us,” Tveit looked back on the first WCC assembly in 1948 in Amsterdam, reflecting on the difficult questions the delegates were asking at the time.

“The assembly message from Amsterdam shows that the delegates were bold in speaking to the reality of the world,” he said. “Their faith was a hope, against the realities of many of their recent experiences.”

They knew that the need for reconciliation was urgent but difficult, he continued. “They knew they were called to be peacemakers,” he said. “They were convinced that overcoming the forces dividing humanity and also threatening relationships within and among the churches would require that they themselves had to be united in love.”

In a prayer, Abuom lamented the situation in much of the world today yet expressed confidence in the ability of the WCC fellowship to unite people in peace. “My eyes hurt when the creation you so love and cherish is abused and misused,” she prayed. “I hear the cries of the men and women; boys and girls in the slave markets, on the run from violence; shouting: ‘Where is God?’” She asked for forgiveness for our refusal to see strangers as our neighbors.

Almighty God, help us to open our hearts and doors to share your love with the poor materially, to speak truth in humility to the poor rich; to be present with the elderly and lonely people. God our creator, hear our prayer and have mercy. Amen.