The former U.N. secretary general valued the perspectives of people of faith 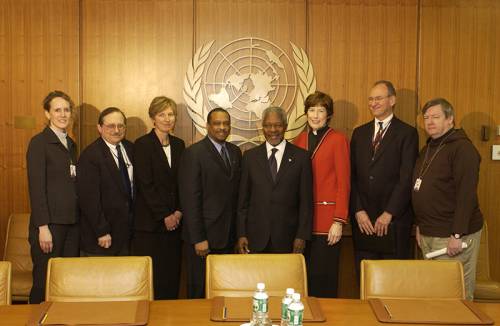 Kofi Annan (fourth from right) met with an ecumenical delegation just days after U.S.-led invasion of Iraq in 2003. The Presbyterians in the photo are Jennifer Butler (left), Sara Lisherness (third from left) and Marian McClure Taylor (third from right). (UN staff photo)

While many voices vied for the attention of Kofi Annan, the former U.N. secretary general consistently listened to people seeking peace from the vantage point of faith, according to a Presbyterian mission leader.

One clear example of Annan’s interest in the views of the faith community came in the early days of the U.S.-led invasion of Iraq in 2003, Lisherness said.

Annan once called his inability to prevent the war the “darkest moment” of his tenure as secretary general. However, just days after the U.S.-led coalition began its push toward Bagdad, Annan accepted a meeting with an ecumenical delegation that included Lisherness, who was then coordinator of the Presbyterian Peacemaking Program, and two other Presbyterians.

The group was concerned that both Iraqi and U.S. forces were failing to properly attend to the needs of civilians. In the early days of the war, humanitarian organizations were having difficulty getting licenses from the U.S. military to operate in Iraq, and those inside the country were not able to get to the places they needed to go.

In addition to Lisherness, Presbyterian Church (U.S.A.) members of the delegation included Jennifer Butler, then associate for global issues at the Presbyterian Ministry at the United Nations, and Marian McClure Taylor, then director of the denomination’s Worldwide Ministries Division. Representatives from Church World Service, Quakers, Anglicans and Lutherans were also part of the group.

In a prepared statement, the group told Annan: “We believe that our humanitarian involvement is especially important given that this war is too often misunderstood as a conflict between Christians and Muslims. Please continue working to establish the conditions for all NGOs (non-governmental organizations), including faith-based ones, to reach the vulnerable citizens of Iraq.”

One of the group’s most pressing concerns was the practice of assigning humanitarian organizations to military units. “We felt that aid needed to be given independently and not be associated with the military,” Lisherness said. “You don’t want to conflate combat and humanitarian aid.”

As the war progressed, the tether between the work of humanitarian organizations and the military began to loosen, she noted.

Annan received the group’s concerns “very graciously,” Lisherness recalled. “We had anticipated a 30-minute meeting with him, and we were there for more than an hour.”

The Presbyterian Ministry at the United Nations played a key role in arranging the meeting with Annan, Lisherness said. The U.N. ministry is funded through gifts to the Peace & Global Witness Offering.

Not long after the meeting, Nathaniel Hurd, who at the time was an independent consultant on U.N./Iraq policy, said, “This group was coming at this from an explicitly faith perspective, and they were trying to assert moral principles. That is always a helpful thing.”

His observations also took note of Annan’s commitment to the faith community. “The fact that he set aside time out of his day and spent a lot of time with a group coming at something from a faith-based moral perspective is very telling,” he said.

Annan’s connection with U.S. Presbyterians began at least as early as his young adulthood when Annan, a native of Ghana, came to the United States to study at Presbyterian-related Macalester College. The school now houses the Kofi Annan Institute for Global Citizenship, and Annan returned to the St. Paul, Minnesota, campus in May for a naming ceremony.

“It all started here in 1959 when I was a student,” Annan said at the ceremony. “The values and lessons I picked up here stayed with me throughout my life.”

Annan became secretary general of the U.N. after a long career of service to the organization. In 2001, Annan and the U.N. shared the Nobel Prize for Peace.

After leaving the U.N., he founded the Kofi Annan Foundation. The Geneva-based organization strives to mobilize “the political will to overcome threats to peace, development and human rights.”

Loving and compassionate God, we thank you for providing for those in need and for blessing us with the desire to bring them your justice. Amen.