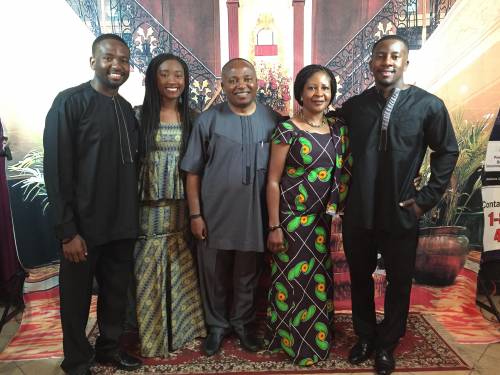 The Rev. Princeton Abaraoha with his wife and three children.

In armed conflicts around the world, the combatants include tens of thousands of children who were conscripted to serve against their will. They are snatched away from their childhood innocence and from the nurture and comfort of their families.

Princeton Abaraoha was a carefree 13-year-old boy when he was grabbed by soldiers and taken to a military training camp. Two weeks later, he was carrying a gun as a soldier in Nigeria’s civil war.

He didn’t see his family for 2½ years. He returned home still recovering from battlefield injuries that required six surgeries and emotional wounds that were buried deep inside him. His family grieved as anger led to destructive behaviors, but his life changed after professing his Christian faith for the first time. “My mother says God changed a heart of stone into a heart of flesh,” Princeton said.

Eventually, Princeton came to the U.S. and today he is pastor of First Presbyterian Church in Midlothian, Texas, and he serves the whole church through the national initiatives of Intercultural Ministries. 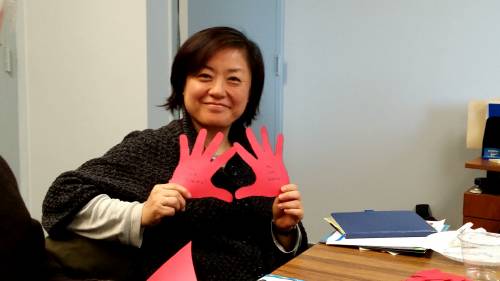 The Rev. Eun Joo Kim of New York City holds a pair of red hands collected by the Presbyterian Ministry at the United Nations and sent to countries that have not signed or ratified the U.N. Optional Protocol to the Convention on the Rights of the Child on the Involvement of Children in Armed Conflict.

Princeton speaks from the heart when he says using child soldiers is “an evil that we need to exterminate, and we need to call attention to any system that supports this evil.” Thanks to your gifts to the Peace & Global Witness Offering, we are doing just that.

Our participation in the offering encourages and facilitates congregational involvement in the Red Hand Campaign. Presbyterians across the country send prints or paper cutouts of red hands along with an accompanying note to the Presbyterian Ministry at the U.N. The hands and a cover letter are then sent to countries that have yet to sign a U.N. protocol that forbids the use of child soldiers, so that experiences like Princeton’s are not repeated.

On this World Communion Sunday, we are welcomed to the table by the One who invited children to come to him and who declared that God’s reign “belongs to such as these.” With believers around the world, may we celebrate the common bond we have in Christ and recommit ourselves to the gospel imperative to care for children everywhere.

Merciful God, we pray for children who are thrust into the throes of combat. We pray that they will be safely returned to their families. May they be healed from physical and emotional wounds and be guided to a life filled with promise. Help us to be instruments of your deliverance in the struggle to end the practice of sending children to war. May our witness reflect your desire for a world where children are honored and peace prevails. Amen.