The wonderful life of Bud Frimoth 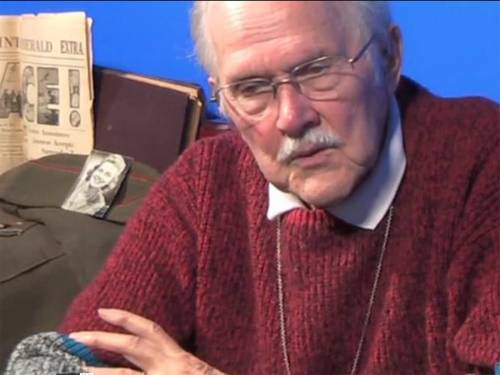 For Bud Frimoth, a 92-year-old World War II veteran and retired minister of the Presbyterian Church (U.S.A.), reading accounts of those working to contain the recent Mendocino Complex fires in California brought back memories from years ago.

He fought fires one summer in the late 1940s in Northern California before enrolling at San Francisco Theological Seminary and remembers the awe-inspiring power of the fires, relaying knowledge of what all firefighters endure.

“What a sensation to be on the line at night,” he said. “The wonder of the fire. Your appreciation for its warmth, knowing full well the awful damages it brings. I wanted to put that damn fire out. It’s strange, the mixed feelings I had, because it kept me warm at night.”

Frimoth’s memories were triggered after reading about a firefighter who died while battling the state’s largest-ever blaze. In an interview, it was clear he wanted to talk about his memories — and not just about his time fighting fires.

“That was a long time ago,” said Frimoth. “I don’t recall much else except that it was quite frightening, because we didn’t know how long it would go on. But the important thing is I went to seminary after that. It’s where I met Lenore. She’s been gone a long time now.”

The common hometown name was Frimoth’s entrée to a conversation with Lenore, whom he remembered as “a beautiful redhead.”

“Our first church was in Spearville, Kansas, just outside of Dodge City — first made famous on a radio program I listened to.”

After Kansas, Bud and Lenore served churches in California and Oregon. In the 1980s, in Portland, he started a radio ministry program for youth called Open Door that encouraged youth to explore spirituality and find healing from various kinds of abuse.

“Every week youth would write us about their lives,” he said. “Then we would talk about it as we played a stack of records.”

Open Door was on 100 rock stations at its peak and heard all over the world.

“One of the most interesting comments I ever got was at a PC(USA) church,” he said. “My name got mentioned. The pastor came up to me afterward saying he’d listened to my program on Armed Forces Radio — and that’s how he ended up in church.”

In addition to the radio ministry, Bud and Lenore had a clown ministry in which they once did a non-verbal clown communion service. “Caring clowning,” as Frimoth described it, employed clowning as a therapeutic listening skill, encouraging viewers to use imagination and innovation in their everyday lives.

Lenore died suddenly of a stroke at age 79 in 2006, the same year Frimoth finished writing his book Bring in the Clowns.

“Lenore was with me for 55 years, you know,” he said. “The most important thing in my life.”

For the past 12 years, Bud has lived alone.

With the memories of his life fading, including the summer before he met Lenore when he was on the line as a firefighter, he hoped to share as much as he could recall. Not for his own posterity, but for the value the stories hold on their own.

Shortly after the interview ended, Frimoth sent an email that reiterated much of what had just been discussed. He reminded us of the three-hour time difference between Louisville and Oregon and that if we called at 10 a.m. in the morning it would only be 7 a.m. there.

“So, don’t call when I’m waking up,” he said. “I’m more of late-nighter and later-rising person. It goes back to my radio days [when] we’d lay voice track down one night, then come in mix voices the next night, after hours.”

After thanking us for our interest in “an old geezer’s life nicknamed Bud,” he revealed that his given name was Elmer and that he was a “junior” named after his father.

He closed the email with what may have been his signature line, recalling his life of service as a soldier, firefighter, pastor, radio host and clown.

“May grace continue to be your leading motive.”

Loving God, may we practice the Golden Rule, remembering you are with us always. Amen.