Partnership plans include expansion of ministry to 52 growth towns 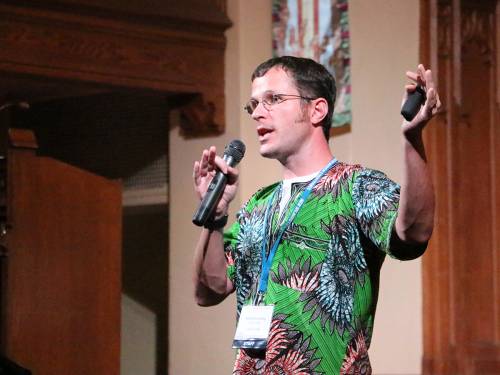 The country of Niger in West Africa is only 1 percent Christian, but “the faithful witness and long-term vision of these believers is great,” said Presbyterian Church (U.S.A.) mission co-workers Michael and Rachel Ludwig, who have worked in mission and ministry alongside the Evangelical Church in the Republic of Niger (EERN) for more than four years. The EERN is the largest Protestant denomination in Niger, with about 12,000 members.

The Ludwigs were recently in the U.S. for the second annual gathering of the Niger Mission Network of the PC(USA), held in conjunction with the New Wilmington Mission Conference in New Wilmington, Pennsylvania. Nearly 30 people attended the meetings to hear updates from the EERN and Presbyterian World Mission co-workers in person or through video conferencing.

The PC(USA) has been in partnership with the EERN in Niger since about 2000, said Debbie Braaksma, Africa area coordinator in Presbyterian World Mission. “Partnering with the EERN in mission in Niger aligns very well with what PC(USA) has felt our priorities are in poverty alleviation, reconciliation and evangelism and discipleship.” 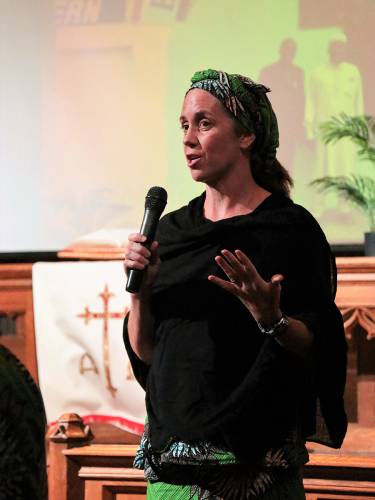 Mission co-worker Rachel Ludwig describes her work in Community Health Evangelism in partnership with the Evangelical Church in the Republic of Niger (EERN). (Photo by Tammy Warren)

Mission co-worker Michael Ludwig said Niger is an “exciting place to be” with a secular government and an openness to the gospel, which encourages the church to reach out to Nigeriens through literacy programs and Community Health Evangelism (CHE).

An EERN representative shared, “I became a follower of Christ at the age of 17, when I took a literacy class that Christians were teaching. Education is a big challenge in my country. Only 29 percent of people are able to read and write.”

“Needs are high, there’s no doubt about it,” Braaksma said, referring to Niger’s poverty rate, water and sanitation needs and population where 50 percent of the people are 15 or younger. “But, I also think the opportunities for mission and ministry are very high at this time because the EERN has worked very hard to have good Christian-Muslim relations.”

Braaksma said a challenge for the mission network is to move from being a “supporter” or “donor” to a “partner” who is involved in “mutual learning.”

She said, “I think we need Niger as much as they need us.”

The EERN has chosen to emphasize initiatives that strengthen their communities, like literacy classes as an effort to bridge relationships between Muslims and Christians. The vision for this long-term strategy, set by the EERN in 2015, seeks to reach people in the 52 new places, which are the equivalent of U.S. county seats, where the country is growing and there is currently no church presence. 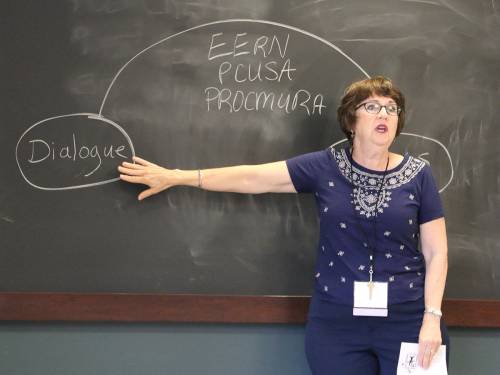 The goal is to purchase land, plant churches and build homes for pastors in each of these 52 new places, so evangelists can share God’s love with Christians and Muslims through literacy classes, health or agriculture teachings, or hosting middle school students who come from surrounding villages.

The EERN has already sent 10 new evangelists to various areas of Niger as part of this goal and hopes to send four more this year. Evangelists complete a two- or four-year program at one of the three Bible schools in Niger. The Bible schools are divided into different course levels with beginning discipleship and literacy offered at Guesheme Bible School, intermediate evangelist and pastor training provided at Dogon Gao Bible School, and advanced pastoral studies and a new French curriculum taught at Aguie Bible School. Strengthening the Bible schools is among the EERN’s priorities for 2019–23.

One of the evangelists sent in 2016 is working primarily with nomadic people in the northern Saharan desert region of Niger. This evangelist has developed a strong bond with the community by starting three new literacy classes. The church is presently in conversation with a pastor to send him to a city that can only be accessed by camel or airplane.

“It’s through literacy classes that the evangelists can speak out of sincerity and show love and care for the community,” Michael Ludwig said. He added that within the next year, the EERN is also planning to send evangelists to a large city on the pathway for migrants traveling from Africa to Europe through the Sahara Desert. The EERN is also planning to begin a radio ministry.

Lord, we lift up the EERN, which has a vision for Niger. Although the challenges are great, we pray that you will make a way for them to move forward. And in doing so, may your son Jesus Christ be glorified. Amen.