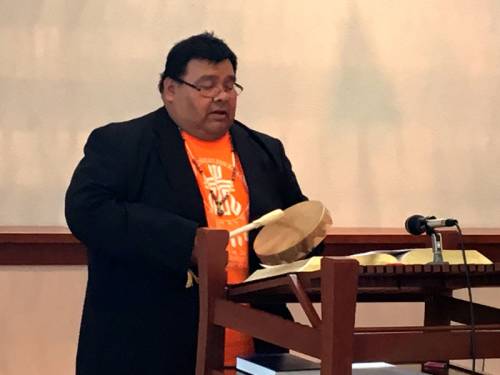 “Halito,” said the Rev. Ronald McKinney, a member of the Native American Consulting Committee (NACC) and preacher for the morning service. “I greet you in the Choctaw way.” McKinney, other members of the NACC and other Presbyterians from throughout the denomination were in Louisville to develop a report on the repudiation of the Doctrine of Discovery, in response to a mandate from the 222nd General Assembly (2016).

“I have been here for the past few days, working with this committee and many others with the enormous task of condensing over 500 years of injustice into a few thousand words,” McKinney said.

McKinney began his message with a story of a journey that helped him realize that his story is not that different from many other Native Americans’ — stories of struggles faced by many Native people that go unrecognized. “This story, this journey I am on, describes the dichotomy that many Native people live with every day as members of the Presbyterian Church and as citizens of this country,” he said.

As a Choctaw Indian from Oklahoma, McKinney said he has always been aware of the stories of his people having been removed from their ancient lands across the “Trail of Tears” to a location now known as Oklahoma.

In the 1830s, nearly 125,000 Native Americans lived on millions of acres in Georgia, Tennessee, Alabama, North Carolina and Florida. Responding to white settlers who wanted to grow cotton on the land, the federal government forced the Native Americans from their homelands and made them walk great distances to a designated “Indian territory” west of the Mississippi River. This often-deadly journey became known as the Trail of Tears. By the late 1830s, few native people remained in the southeastern United States.

McKinney said that in researching his family history he came across some articles from books that were based on the journals of Presbyterian missionaries written during the time the Native people were removed from their land. The Presbyterian Church played a key role in the Indian assimilation movement in which the church disregarded the Native peoples’ indigenous knowledge and beliefs and worked to assimilate Native Americans to the lifeways of white people. 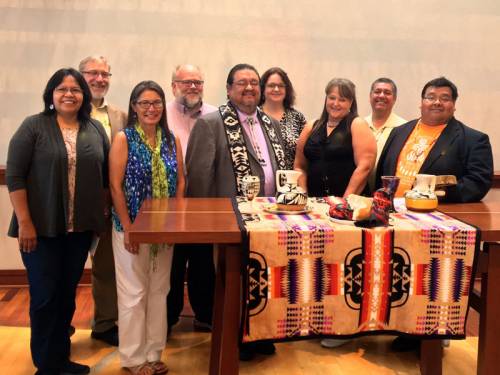 Members of the Native American Consulting Committee and other Presbyterians were in Louisville to develop a report on the repudiation of the Doctrine of Discovery, a mandate from the 222nd General Assembly (2016). (Photo by Gail Strange)

The 222nd General Assembly (2016) issued an apology on behalf of the Presbyterian Church (U.S.A.) and its members to U.S. citizens of Native American ancestry — “both those within and beyond our denomination.”

The statement added: “We offer this apology especially to those who were and are part of ‘stolen generations’ during the Indian-assimilation movement, namely former students of Indian boarding schools, their families and their communities.”

“Our relationship with this church and this country is a storm that has been raging back then and even today,” McKinney said. “We are caught between the injustices that were done and the possibilities of what is to come. We are at odds with the past practices of this church, yet we love it.”

He added, “Our young people today are more aware and have more access to our history than ever before, yet they continue to have a sense of pride in being a part of the PC(USA) and a pride in America.”

Creator of all we see and all we cannot see, your Spirit has been with us from the beginning and will be with us through all time. We thank you for the gift of life and the gift of the earth that is our home. May we live with gratitude in our hearts each day as we seek to be faithful witnesses of your good news. Amen.