No pews is good news 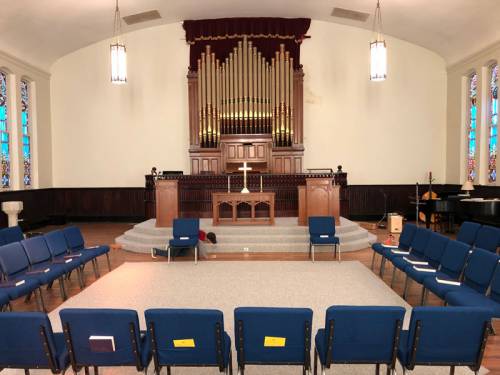 Baltimore’s Light Street Presbyterian Church has seen attendance double in the past two years. In a move toward revitalization, church members ripped out the pews and are now using the sanctuary as a multi-purpose space. (Contributed photo)

That is until the development of Baltimore’s Inner Harbor began a rapid gentrification of the Federal Hill neighborhood. The centerpiece of that development, the shopping complex Harborplace, opened in 1980.

Gradually the church, which had served its neighborhood with a soup kitchen, flea market and an affordable housing project, became disconnected from its now more affluent, secular transient community of young professionals.

“It had been the place other churches in Baltimore would go to do mission,” said Light Street’s pastor, the Rev. Tim Hughes Williams.

Even though the church is only blocks away from that kind of poverty, as gentrification in the church’s neighborhood occurred, Light Street’s congregation dwindled in size. Eventually the church closed its soup kitchen, realizing it was no longer in a desirable location as people were taking taxis to get there.

The church continued to provide innovative ministries, like a very successful farmers market to its changing neighborhood. Down to 25 members by 2017, church leaders decided to pool the church’s remaining funds to call a pastor for three years and to create a 1001 New Worshiping Community to help reinvent Light Street ministry for its current context.  Since then, the congregation has nearly doubled in size. Nearly half of its 50 worshipers are new.

“The people who are coming to us tend to be progressive, diverse and local,” says Hughes Williams. “Our neighborhood is more diverse than people think.”

They’ve come, in part, because of what Light Street decided to do with its sanctuary space. While beautiful, it took up nearly 50 percent of the building. So last summer the congregation took out the pews. 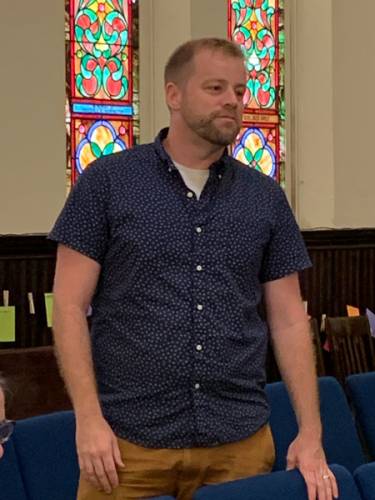 “Our goal was to make it a multipurpose space,” said Hughes Williams, “and to remove some of the traditional elements that might have been a symbolic barrier, preventing the spiritually hungered from entering our space.”

Once the pews were gone, it was almost like those who started to come had “a visual picture of what we were trying to do for the community,” he said.

When Light Street took out the pews, they also pulled up the carpet and for the first time in 75 years saw beautiful hardwood floors. Now in the sanctuary members and friends worship and host events for their community.

West Baltimore resident and longtime attendee Selina Scipio has used the church’s commercial kitchen to run a catering business for years. Now she can host catering events in the sanctuary for nearby companies and for the Presbytery of Baltimore. Recently, Light Street hosted a New Worshiping Community luncheon during Big Tent.

“Our hope is that business will provide an income stream that will help us be sustainable,” says Hughes Williams, “and also a platform for all kinds of ministries.”

Even as Light Street reconnects to the local community, the church wants to remain connected with its social justice roots. Church members say they’ve been given an opportunity to speak about how a community of affluence might be a force for greater good in a city that has a history of racism and systemic disinvestment.

Hughes Williams reports that the congregation continues to ask, “How can we bring our progressive values to bear in a way that is financially sustainable and relevant? How are we going use the privilege we’ve been given for the good of the city?’”

Empowering and energizing God, source of life and light, grant us the vision to see the kingdom of God on earth and the courage to sacrifice to bring that kingdom right here, right now. Amen.