Pastor’s story is one of God’s faithfulness 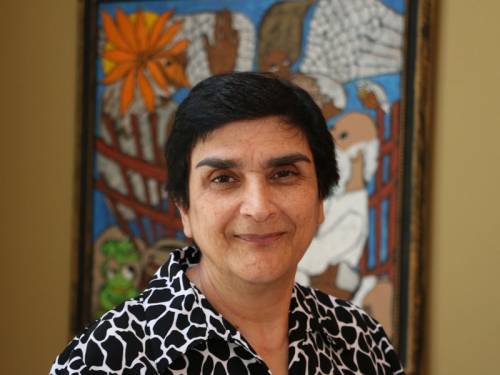 The Rev. Dr. Lucy Dergarabedian left Lebanon 30 years ago, knowing she would likely never live there again. She wanted to be a minister of Word and Sacrament and that was not an option for her in her home country.

Now an ordained pastor of many years, she will return to Lebanon this winter as a PC(USA) long-term volunteer serving as chaplain, instructor and director of the resource center for Christian education and women’s studies at the Near East School of Theology in Beirut.

After serving as a chaplain for more than 20 years, her travels took her to Korea; Hawaii; Egypt; Iraq; Japan; South Carolina; Georgia; Texas; Washington, D.C.; and Virginia. As the only surviving sibling, her parents always moved with her.

She retired in 2016 with the intention of learning sign language so she could translate and caption meetings from her home, but throughout her life, God has shown her that he has plans for her that she cannot predict or even imagine.

God began revealing the plan in December 2017 when Dergarabedian was asked to deliver a holiday sermon at the Near East School of Theology. At the conclusion of the service, she saw a group of young women and overheard them talking in Arabic. “They said, ‘Look, she is a woman, she has a doctorate, she is ordained, and she is one of us.”

She said that’s when God started to nudge her. Her response was, “Are you kidding me? I already have a plan for my retirement, but I began to feel that God wanted me to become a long-term volunteer and a role model for Armenian/Lebanese females.”

For many reasons, she believes this is leap of faith and not necessarily an easy one. Her mother, now in her 80s, will move with her to Lebanon but will have no access to care.

“I’m human; I worry,” she said. “But God said to me, ‘When your parents came as visitors, remember how I intervened and helped them through various agencies. Lucy, do you think you care for your mother more than I do?’ God has shown his faithfulness many times by opening doors when I needed it most.”

It is very similar to a leap of faith she took 30 years ago when she left Lebanon on a boat bound for Cypress and then a plane to the Presbyterian School of Christian Education at Union Presbyterian Seminary in Richmond, Virginia.

She had received a letter saying she had been accepted and would receive a full scholarship to complete her education. One week into the school year, she was called to the administration office and asked how she planned to pay for her tuition. She was stunned. She later learned that her acceptance letter had gone through several hands and the message had inadvertently been changed. Her father sold the last thing he had from his father, but it was only enough for incidentals.

The seminary eventually allowed her to stay but she would owe $7,500 before she could graduate. Enter Jerry Houchens, the person in charge of ordination exams who was visiting the seminary. He wanted to meet her because it was very unusual for any student, let alone a foreign student, to score 98 percent on the Bible content exam.

When Lucy met him, she shared the news that she may not be graduating at all because she owed thousands of dollars. Houchens immediately began looking for solutions, and in a short time he told her she would only owe $1,000.

He explained that every student who worked for a Presbyterian church for a year would have $1,000 removed from their student debt. She would graduate and owe nothing.

So, she said, that’s why she is not worried that God will provide for her mother.

“He is telling me, ‘Lucy I took care of these things 30 years ago, so now that you are facing financial insecurity for your mother, remember that you have experienced my faithfulness through many different avenues. I am the same yesterday, today and tomorrow.’ ”

God of singing stars and dancing mountains, your majesty and power astound us. Your steadfast love humbles us. We thankfully stand in your presence. Pure joy! Amen.