‘We want to come back next year and go to this,’ Chicago teens say

“Total joy” is how Presbyterian Youth Triennium director Gina Yeager-Buckley remembers one of this year’s experiences. Thinking about it still gives her energy. 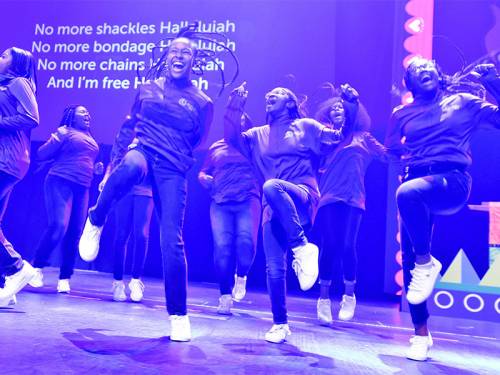 The Soul Children of Chicago perform at the 2019 Presbyterian Youth Triennium. (Michael Erdelyi)

Exhausted, she was about to hop onto a golf cart for nighttime residence hall checks when she was stopped by a group of youth from the Soul Children of Chicago.

The choir of youth and young adults had arrived at Purdue University for the triennial PC(USA) youth event earlier that morning — after leaving Chicago at 6:30 a.m. — for an evening concert at Triennium called “Loudest Praise.”

And now, after two sound checks and two rehearsals — they’d performed earlier at afternoon worship — and a 90-minute evening concert, weary parents and family members of the Soul Children said their goodbyes to their Triennium liaisons for the day. Clusters of Soul Children teenagers were also saying thanks to the Triennium staff before boarding buses for their return trip to Chicago.

That’s when Yeager-Buckley was approached — at 11:30 p.m. — by a half-dozen of the Soul Children. Mainly teenagers, they asked, “Are you the woman in charge?”

Yeager-Buckley laughed and responded, “Something like that,” and their excitement spilled out. “We want to come back next year and go to this,” they shouted. “We had so much fun.” When Yeager-Buckley asked them what they had done during their day at Triennium, they all began talking at once.

Yeager-Buckley also heard “We had so much fun walking all over the place,” and that made her really laugh. She knows that walking at Triennium is not popular with everyone.

At the end of a long day, Yeager-Buckley was sharing a moment of joy.

That morning began with a heat advisory warning, so the Triennium team scrambled to move “Loudest Praise” indoors — which completely altered the plans of three performing groups. 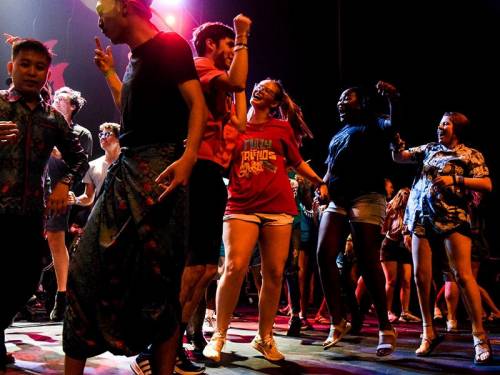 When PYT participants got on stage with Soul Children of Chicago, American Indian Youth Council and a group of dancers from Indonesia the bonds of racial and cultural differences were broken. (Rich Copley)

During their performance, the Soul Children of Chicago invited the dancers from both groups to join them on stage. Soon, other young people were joining them.

“For one stressful and dazzling moment, there was this blur of complete exuberance on the stage,” Yeager-Buckley said. “But then we had to do the safety call and ask our care team and recreation leaders to help participants off the stage.”

Soul Children of Chicago director Dr. Walt Whitman acknowledged that “it got crazy” when more and more Triennium participants wanted to get on stage with the choir. But then he reflected on the significance of that moment, of how black and white kids came together from different types of ministry and worship.

“They’re more into bands and Christian contemporary choir,” he said, “so for them to embrace and participate the way they did broke the bonds of racial and cultural differences.”

“They became one,” he added, “seeing only good music and God. I’m glad they felt that.”

As Yeager-Buckley stood among the joyful youth from Soul Chicago and the Triennium staff, late that night she was given a picture of the “Here’s My Heart” Triennium logo — and she was reminded of what an incredible community Triennium is for young people.

“Here they were, kids full of joy, for the experience of and being with other young people,” she said. “Offering us joy with the sacrifice of hundreds of hours of practice.”

They were “binding their hearts to God by settling in with others,” she continued. “Playing and eating with participants. Singing and dancing with the gifts that might be new or different for them. Held by God and the Presbyterian Youth Triennium as sacred.”

God, thank you for your faithfulness and your assurance that with you, all things are possible. Help us serve in the name of Christ and to trust you for the result. Amen.