‘When we reach into the community, we bring people in’ 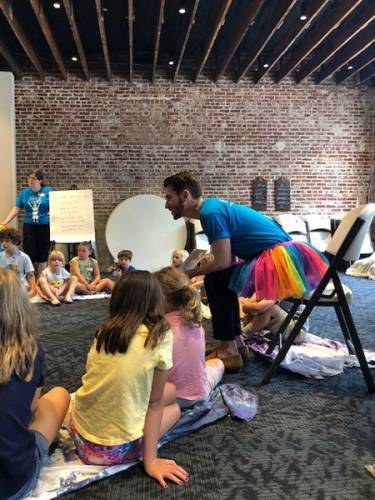 Peace Camp, which Evergreen Presbyterian Church in Memphis, Tenn., organized for about 30 children earlier this year, was planned and taught by church members and friends. The church, now operating in a storefront after selling its property to a nearby college, is one of the Presbyterian Church (U.S.A.) congregations that have accepted the Matthew 25 invitation. (Contributed photo)

After hearing social media feedback that parents were not enamored with Vacation Bible School offerings at nearby churches, Evergreen Presbyterian Church in Memphis, Tennessee, created from scratch its own Peace Camp.

Thirty-one campers, including about 10 from the host church, took part in this year’s camp. With help from their neighbors, church members wrote the curriculum and staffed the five-hour-per-day, five-day event, spending one day each on a significant topic — gender, social class and poverty, race, migrants and care for the Earth.

“Our church has been in a major transition. We are rebuilding who we are and what we want to do in the world,” said Evergreen’s pastor, the Rev. Lucy Waechter Webb. “We have done a lot of listening about the mission of the church in this new season.” During Peace Camp, “we had amazing, courageous conversations,” she said.

Campers’ parents participated too, using a workbook Evergreen created just for them. “We told parents we can’t expect more of our children than we expect of ourselves,” Waechter Webb said. “It was an amazing grassroots effort and a nice opportunity to connect with new families. Some of them indicated they’re interested in attending because it’s hard to find congregations that are talking about these things.”

Evergreen is among the congregations that have accepted the Matthew 25 invitation, which encourages churches and mid councils to be more actively engaged in the world. The congregation plans to work on all three focus areas: building congregational vitality, dismantling structural racism and eradicating systemic poverty. And it’s doing all that work from a new storefront location after selling its former building to its neighbor, Rhodes College.

Faced with declining membership a few years ago, Evergreen made what the church’s clerk of session, Marti Becker, called “the painful but necessary decision” to sell its property to Rhodes College. It moved to temporary worship space and then moved again to its current location, where renovations are nearly complete.

After selling its property but still worshiping at its former site, a committee paid visits to other churches in Midtown Memphis, including a music club, which Evergreen ended up using for a year. “We saw that as a temporary space,” Becker said. “It helped us to focus on where we really wanted to go.”

The storefront Evergreen decided to purchase “wasn’t our original thought,” she said.

“Originally it was a grocery store and pharmacy. The space was about two miles from where we were, and it just opened up.”

The church moved to its present location three years ago and raised $200,000 for renovations. It brought over two important worship features from its longtime location: the Communion table and a large bell.

The bell held special significance for an Evergreen member who died this summer at 93.

“She grew up in the church, and she remembers children fighting over who would ring the bell” on Sunday morning, Becker said. “The pastor would say to the custodian, ‘Get those kids straightened out! Put them in alphabetical order.’”

These days, Becker said, when there’s a child is among Evergreen’s 40–60 worshipers on a given Sunday, the child has the honor of ringing the bell.

The storefront location allows for some unique ministry to occur at Evergreen. In addition to the Peace Camp, a Beer + Hymns night is held the first Friday of every month. Church members and friends gather at a nearby bar and restaurant to, well, drink beer and sing hymns.

Evergreen also participates in the Memphis Interfaith Coalition for Action and Hope, or MICAH. Evergreen helped found the organization three years ago, and it’s grown to 60 organizations and faith communities, including Jews and Muslims. According to Waechter Webb, the MICAH ministry has three focus areas: education equity, economic equity and immigration and intercultural equity, including police accountability.