Everyone is welcome at God’s feast 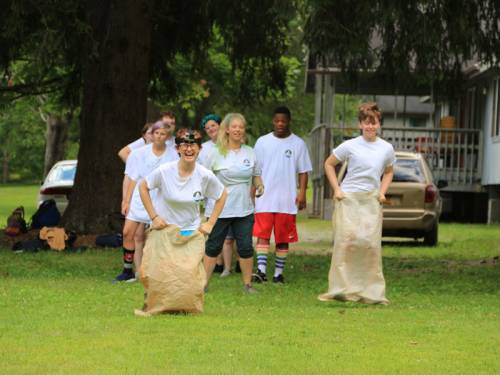 It’s been a few months since Holmes Camp & Retreat Center in Holmes, New York, made history. Now the camp’s executive director, the Rev. Bryan Breault, is hearing lovely things from the parents of campers from across the country.

Parents are thanking him — and the facility of the presbyteries of Hudson River, Long Island and New York City — for hosting what is believed to be the first-ever weeklong camp for LGBTQ+ high school youth at a Presbyterian Church (U.S.A.) conference center.

“They’re saying things like, ‘My son has a renewed sense of who he is,’ ” Breault said.

Those affirmations, the energy and spirit were felt during the week and the fact that only two of the 10 campers had been to camp previously are some of the reasons why Breault plans to do another Camp Q next year.

Participants came from all over the country, including California and Wisconsin. Even though most of them were new to the PC(USA) camping experience, Breault said they took to the programming for the week, including the spiritual and biblical pieces widely used in PC(USA) and other denominations’ camp curricula.

During the week they discussed Jesus’ message of radical inclusion, including people not considered to be of value in Jesus’ day, such as women, children, slaves, neighboring Samaritans and those with an illness.

When Breault asked participants who Jesus would welcome today, who is considered an outsider, they realized the message of Jesus is just as relevant for the world today — and for their own spiritual lives.

“The message is that everyone is welcome at God’s feast regardless of our human-created divisions,” Breault said. “Every single person was a joy to be with.”

Holmes engaged a local LGBTQ chorus to sing for participants at Camp Q, followed by a discussion of why community is so important.  They paid a visit to the Stonewall Inn in Greenwich Village, considered by many to be the place where the modern LGBTQ+ movement began. The visit came immediately after the 50th anniversary of resistance to routine police raids on the gay community. This gave Breault an opportunity to discuss with campers the difficult-to-resolve issue that modern gay pride started with violence.

According to Breault, Camp Q has a focus on social and environmental justice, which is the direction in which Holmes’ board of directors and the three presbyteries want to move. At the same time, the goal is to continue providing traditional camp elements of renewal, spiritual growth and community building.

“We want this to be a place where like Jesus, participants can come to pray and recharge,” he said, “and then return to community.”

“For those who came, it was transformational,” he said. “It’s a place where church should be. I believe it has a very exciting future.”

God of all seasons of life, thank you for the blessing of the young adults of our church. Guide them and give them wisdom and give the rest of us the willingness to let them lead us. Amen.