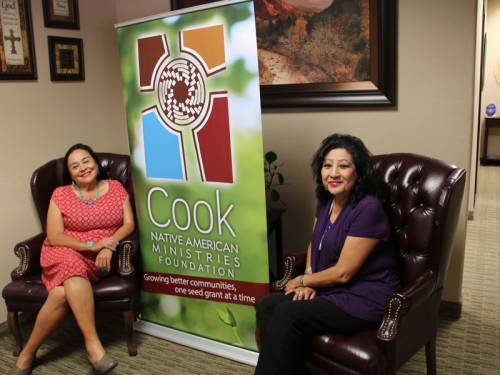 This is the second of two stories featuring the Cook Native American Ministries Foundation. The first story appeared Nov. 5.

Cook Christian Training School, one of the U.S.’s most well-known and renowned institutions dedicated to training Native people to become leaders in the church, closed in 2008, leaving behind a 16-acre campus — and its mission of Christian ministry in Indian Country.

To fulfill this mission, the college’s board of directors decided to create a foundation with the proceeds from selling the old Cook campus in Tempe, Arizona.

In 2007, “the board of trustees for the school approved a plan to sell the land the school campus stood on,” said Wendy Weston, a Navajo Nation citizen who serves as the executive director and CEO of the Cook Native American Ministries Foundation. “Using proceeds of the land sale, the Cook Native American Ministries Foundation was established in 2015. We administer a seed grant program to support Native churches and communities through programs and projects that continue the legacy of Charles H. Cook.”

The foundation is governed by a nine-member board of directors who come from tribal communities across the country. “We have elders; we have a young person,” Weston said. “We have two non-Native board members. They are all devoted and dedicated to the work that the foundation does. They’re very supportive and committed to our mission.”

Longtime Cook College staff member Della Peña, who is both Pima and Hopi, is also continuing her more than 30 years of service with Cook as the foundation’s board liaison and grants manager.

And, just as the Cook School had a strong faith-centered purpose, so does the foundation that was born from the college’s long history of serving God through supporting the Native ministry. “We function as a nonprofit organization, and we have programs and initiatives implemented through the nonprofit arm,” Weston said.

The foundation’s newest initiative is designed to grow strong, healthy communities. “We developed the Seed Grant Program, which awards grants of up to $10,000 to small tribally based or community-based organizations or churches that have nonprofit status,” said Weston.

The foundation also has a sponsorship program, which aims to build goodwill and to raise awareness of “who we are, what we do and that we support programs and events that we see are making positive changes in our communities,” she said.

The family connections that are at the heart of Cook’s mission are still intact. “Rev. Stephen Marsh, who is on our board of directors, is a great-great grandson of Charles Cook,” said Peña. “It’s great to have him on our team because he fills us in on history as well as assisting with this organization.”

The resources realized from the sale of the Cook campus are in the secure hands of the foundation’s financial steward, the New Covenant Trust Company, N.A., which is part of the Presbyterian Foundation. “They hold our investments and they do very well for us,” Weston said. The income from the fund is earmarked for Cook foundation’s work.

However, Weston says that the foundation also welcomes donors wishing to support the foundation’s work. “We’re currently building a planned giving program for people who like what we’re doing and who would like to contribute to our cause of educating Native people while being in a Christian-based environment,” Weston said. Shew grew up in an Episcopalian home, but also honors her Navajo cultural ties. “There were a lot of people who donated to the school and we plan to grow this following through our efforts.”

Looking forward into the foundation’s future, “I’d like to see us develop and implement more programs that we can offer to not only our Native communities but to the global community,” Weston said, “and to also look and think critically, to contribute the public discourse on religion and society and how those things affect our jobs, our education and our lives.”

She also notes that although the foundation is affiliated with the Presbyterian Church (U.S.A.) because of its ties with founder Charles Cook, it’s also nondenominational in its support. “We support all faiths,” she said.

“We’re very excited about new possibilities for us as we move forward,” she said.

And Peña said, “our mission has always been to support other ministries whether it be the school or the foundation. We’re still doing that.”

Debra Utacia Krol for The Presbyterian Foundation. Krol reports on Native issues, environmental and science issues, and art. She is an enrolled member of the Xolon (also known as Jolon) Salinan Tribe from the Central California coastal ranges.

Creator of all we see and all we cannot see, your Spirit has been with us from the beginning and will be with us through all time. We thank you for the gift of life, and for the gift of the earth that is our home. May we live with gratitude in our hearts each day as we seek to be faithful witnesses of your good news. Amen.