The Bible for people with short attention spans 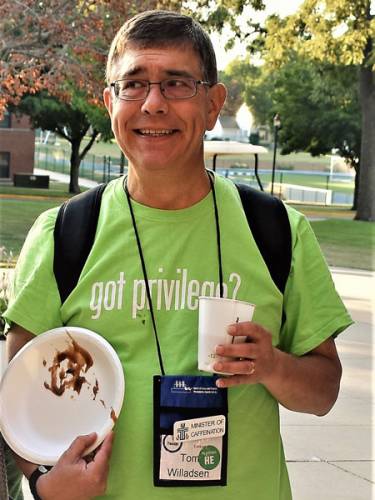 During Synod School last month, the Rev. Tom Willadsen offered a workshop on the Bible for people with short attention spans. (Contributed photo)

The Rev. Tom Willadsen of Oshkosh, Wisconsin, has become a fixture at the Synod of Lakes and Prairies’ Synod School, where his classes are known for humor.

Willadsen, author of “OMG! LOL! Faith and Laughter,” which can be found here, spent 19 years as pastor of First Presbyerian Church in Oshkosh. There he organized monthly meetings of faith leaders in the community and served as organizer and master of ceremonies at an annual Interfaith Festival of Gratitude.

Aware of Willadsen’s reputation for faith, laughter and ecumenism, a reporter discovered that Willadsen planned a class on the Bible for people with short attention spans. So the reporter sought out Willadsen’s perspective on Synod School and the class, which included an evening of Bible reading at a Storm Lake, Iowa, bar. The following is an email exchange between the reporter and Willadsen:

Question: How was Synod School this year?

Answer: Synod School is its own culture. I’ve gone six years in a row and I’ve watched the kids grow up. …I liked moving back to the dining arrangement of prior years — last year’s renovation, though, was in evidence. They put me in Pierce Hall, which is super close to where the action is. There’s a tunnel that goes directly to the dining hall. I guess they thought that when I turned 55 I got feeble. I’m not complaining.

Q: What possessed you to offer a class on the Bible for people with short attention spans?

A: I proposed two classes for 2018: “Laughter as a Spiritual Discipline” and “Bible Study for People with Short Attention Spans.” I taught the former last year and it attracted people who wanted instruction in spiritual discipline, rather than laughter. People who’ve taken my classes before know that I’m profoundly shallow, so last year’s class was a mismatch.

Seriously, as a preacher I find it very difficult to preach from books like Esther or Ruth or Jonah because as a preacher I have to spend a lot of time putting the texts into context. A few years ago I organized consecutive Sundays during which we read Ruth then Jonah in their entirety. After each chapter I would bring in some comments on the texts. It gave the congregation a more complete telling of the stories.

Having had success with covering complete books in worship, I thought it would be fun to read some of the shortest books in the Bible together. The experience of hearing a complete work is very different from hearing a few verses prior to a sermon or reading the text silently. Just that change helps us experience Scripture more completely.

Just hearing that much Scripture is rare today. Getting skilled but not dramatic readers for each part helps worshipers and students recognize when the speakers change. All I did was download the books from the Bible and divide the texts into four or five parts. I always cast a woman to read the part of God. A few years ago, the woman reading the God part added “Oy, Jonah” to Jonah 4:9, before reading, “Is it right for you to be angry about the bush?” Suddenly God had the weariness of a Jewish mother, and it opened a whole new lens through which to see Jonah for the whole class.

… Depending on how you count them, there are more than 10 metaphors for death in Jonah 2. The second chapter is the part where Jonah is in the belly of the big fish — it’s the only thing most people know about Jonah. In my class I asked for the class to shout out modern metaphors for death — “six feet under,” “pushing up daisies,” “bought the farm.”

When we got to the end of Jonah 2, when the big fish vomits Jonah onto the shore, we came up with modern euphemisms for throwing up. Some favorites were “driving the porcelain bus” and “round-trip meal ticket.”

Q: How many people were in your class?

A: About 30. I picked up a couple midweek. One lady said she had heard the laughter from the class the day before and decided to check it out.

Q: What parts of the Bible did you read?

A: I began the first class by telling students, when they were asked what they did at Synod School, to say, “I read six books, start to finish.” For the record we read James, Philemon and Jude from the New Testament, and Ruth, Jonah and Obadiah from the Hebrew Scriptures.

Q: Why did you pick those books?

A: They’re short. I’ve been preaching more than 30 years and I’ve never cited Obadiah or Jude, so I decided it was time to look at them.

Q: Did anything in particular stand out in your class?

A: For me, the best personal moment was when I was telling the class about how significant it can be to take another character’s point of view when reading a parable. I suggested they think about the mother of the Prodigal Son and his brother. She’s not mentioned in the parable, but she loved all three men in her life — what would that be like? Then I said, “If you want a short sermon, take the fatted calf’s perspective: ‘The screw-up’s home; I’m pot roast.’” I totally dare someone to preach that sermon.

Q: I understand you went to a bar downtown to read the Bible. Can you describe that event?

A: It is a different experience reading Scripture in different places.

Since Jonah is really intended as a humorous commentary on hubris and human pettiness — in my opinion — it lends itself to be read publicly and playfully. About 25 people went on the field trip. I arranged an upper room for us at the Lake Avenue Lounge in downtown Storm Lake. It took us a while to get our drinks, but someone figured out how to play the jukebox, so we did “YMCA.” I asked the bartender for help after we couldn’t get the darn thing to stop.

We did a think-fast or two; I like to ask people to name a dessert they never want to eat again or an interesting thing they’ve broken. Then we read the text one chapter at a time.

“Shouldn’t I be concerned about a city of 120,000 people who cannot tell their right hand from their left hand, and also many cattle?”

OK, maybe reading that sentence alone [Jonah 4:11], without the context of the more than 10 euphemisms for death, and stone cold sober, isn’t all that funny. But after dancing “YMCA” with a roomful of Presbyterians on a field trip from Synod School, that punchline had people laughing ’til beer came out their noses. Which is always a good sign, even though it hurts.

Duane Sweep, Director of Communications for the Synod of Lakes and Prairies, and The Rev. Tom Willadsen, Minister, Humorist and Author of “OMG! LOL! Faith and Laughter”

Lord, thank you for the times when we can join our brothers and sisters in joyful fellowship. Help us always to grow in our faith and to reflect your love in every aspect of our lives. Amen..