‘A bright spot’ in South Sudan

Amid challenges, students and staff at Nile Theological College remain focused on fulfilling the Great Commission 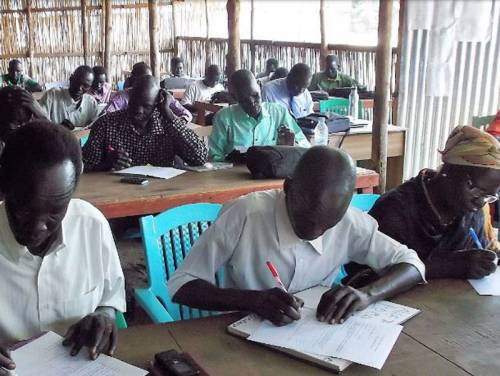 Junior students take a quiz in a class taught by the Rev. Bob Rice at Nile Theological College in Juba, South Sudan. (Phot by Bob Rice)

The Arabic track stayed in the north at its founding location in Khartoum, Sudan, while the English track moved more than 400 miles south to Malakal, South Sudan.

It was a time for new beginnings, a time of much hope.

Both campuses are working to bring peace to their struggling countries — one theology student and one graduating class at a time — just as they have been doing since the central Khartoum campus was established in a small, rented house in May 1991.

“NTC began as a joint venture between the Sudan Presbyterian Evangelical Church (SPEC) and the Presbyterian Church of Sudan (PCOS),” said Dave Dawson, a member and past convener of the Sudan/South Sudan Mission Network. “Nearly 30 years ago, these two churches recognized the increasing demand for Christian ministry in the then united Sudan.”

To establish the first institution of higher education to offer three-year diploma and four-year bachelor’s degree programs in theological education for the Sudanese people, SPEC and PCOS reached out to the Rev. William B. “Bill” Anderson, long-time Presbyterian mission co-worker who served in South Sudan and Ethiopia with his late wife, Lois, for nearly half a century. Anderson not only founded NTC in Khartoum, but he also served as the college’s first dean of studies in its early years.

NTC in Khartoum, Sudan, and NTC in Juba, South Sudan, have many things in common, especially their faithful and resilient perseverance toward peace and reconciliation for all people in their war-torn countries.

In 2013, a civil war erupted in South Sudan, with heavy violence and much loss of life, decimating NTC’s campus in Malakal and forcing its 100 students and staff to scatter for safety and security reasons for several months. 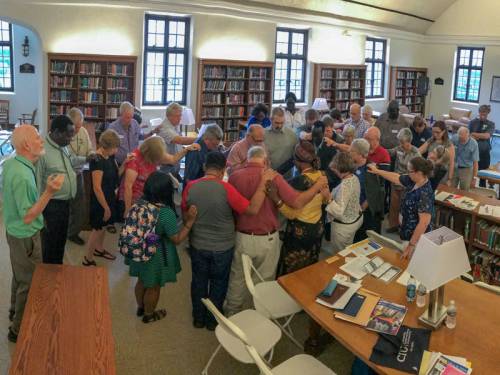 Mission co-workers and members of the Sudan/South Sudan Mission Network pray for the Rev. Santino Odong, principal of Nile Theological College in Juba, South Sudan. Odong was part of the first graduating class at NTC’s Khartoum campus in December 1995. (Photo by Tammy Warren)

In July 2014 NTC-Malakal’s principal, the Rev. Santino Odong, visited Malakal to assess the damage and determine if anything could be salvaged and brought to its new location in South Sudan’s capital city, Juba. Odong learned that the administrative offices had been destroyed, but the library had survived. A few books had been taken, but about 85 percent of the books were intact.

Cargo planes were arriving in Malakal full of supplies and returning to Juba empty, which prompted Odong to ask an airline if they could transport the books from Malakal to Juba. In March 2015, the airline transported the books at no charge.

About a week after the books were delivered by cargo plane to Juba, violence broke out in Malakal. Odong now sees that the hand of God was at work: That was the last plane to go in or out of Malakal for two years.

The miracle of the rescue of the library books prompted Odong and others to think about reopening Nile Theological College in Juba. They started making contacts to gather their 100 students back, but only five showed up.

“What do we do with five students?” Odong said. “Do we begin, or do we wait?” Through prayer and conversations with administrators and staff, they decided to reopen. “If we wait, the students will be waiting where they are,” Odong said. “So, let’s begin.” They reasoned that those students who did not initially return would be encouraged to come back if they heard the school was operational.

In summer 2015, NTC-Juba reopened in the bakery of a former orphanage with five students. The following year there were 17 students, and today there are 85, 10 of whom are women. Currently the college is in the process of renovating a government facility with the renovations being accepted in lieu of rent for three years. The Presbyterian Church (U.S.A.) has provided some funds to assist in renovating the facility.

Almighty God, guide our efforts to provide a ministry to include all who seek your love and grace. Help us to appreciate all of your children, to encourage their gifts, and to be facilitators and supporters as we offer them a welcoming place to gather in the light of your love and wisdom. Amen.