What comes next after a denomination apologizes for its sin?

Two years ago, the current and former Stated Clerks of the Presbyterian Church (U.S.A.) journeyed to Utqiagvik (Barrow, Alaska) — the nation’s northernmost city — to apologize to Native Americans, Alaska natives and native Hawaiians for damage inflicted by the church in previous decades.

That act came as the result of action by the 222nd General Assembly (2016), which directed the apology within and beyond the denomination “especially to those who were and are part of ‘stolen generations’ during the Indian-assimilation movement, namely former students of Indian boarding schools, their families and their communities,” according to assembly minutes. 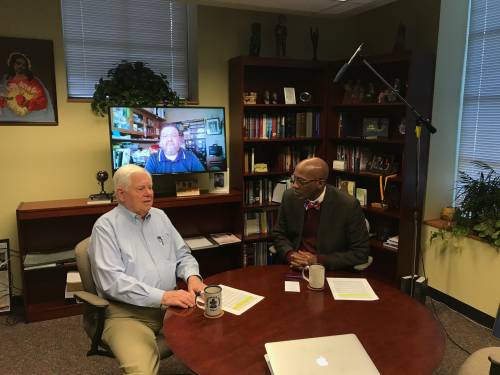 From left, the Rev. Vernon Broyles, the Rev. Irv Porter and the Rev. Dr. J. Herbert Nelson, II, participate in “Coffee with the Clerk” Monday. (Photo by Randy Hobson)

The Rev. Dr. J. Herbert Nelson, II, the current Stated Clerk, used his “Coffee with the Clerk” Facebook Live platform to talk about ways Presbyterians can continue their work to honor and include Native Americans. His guests were the Rev. Irv Porter, the denomination’s associate for Native American Intercultural Congregational Support, and the Rev. Vernon Broyles, a volunteer for public witness serving in the Office of the General Assembly.

Porter, an enrolled member of the Pima Tribe who’s also descended from the Nez Perce and T’hono O’odham tribes, is also the part-time pastor of Church of the Indian Fellowship in Tacoma, Washington. He said many Native Americans have used storytelling to begin healing from the intergenerational trauma that comes from being torn from their family to attend a boarding school.

“I highly recommend the church hear the stories of where people are coming from. Not to rehash what happened, but in telling their stories, there’s healing,” he said. “An apology is really just the beginning. To hear a national church apologize is one thing. Now Native American people are waiting to see what the next result will be.”

The forced education by white people that many Native children experienced two and three generations ago impacted each one differently, Porter said. Many children grew up not speaking what would have been their Native tongue and not knowing the family stories that other children learn by heart at a young age.

“Some went on to have very good lives,” he said. “For others, this was the beginning of traumatic experiences they had for the rest of their lives,” trauma they often passed on to their children and grandchildren, he said.

After viewing the video of the Rev. Gradye Parsons, the former Stated Clerk of the PC(USA), apologizing on behalf of the denomination, “you could see in people’s faces” the impact the apology made as Parsons’ words were translated into their indigenous language, Porter said.

Walk into a Presbyterian Church with mostly Native worshipers “and a lot of what you’d see is familiar,” Porter said. But the visitor would also see a few elements not present in most Presbyterian churches, he said.

“There’s time for people to share what God is doing in their life,” he said. “People can go on and on, but nobody leaves. The 60-minute issue [capping worship at one hour] is not there for Native Americans. It has everything to do with being there in the spirit of what is happening.”

Looking at the mistreatment of Native people and the denomination’s eventual apology in theological terms, Broyles said, “Sin is sin.”

“One thing that has come through clearly in conversation with Alaska native people is that we as white people look at nature as something to be exploited,” he said. “The Genesis story clearly lays out the unity of God’s creation, and Native people understand that.”

While there are plenty of books and other resources Presbyterians can use to educate themselves about this era, “the emphasis today is how do we do that with regards to relationships,” Nelson said, wrapping up the hourlong conversation. The “powerful message” he learned while helping to deliver the apology “is that a way to break down barriers is through personal engagement.”

“People do things we don’t understand,” he said. “There is something in their story that makes a difference” in beginning to understand their thinking, “and that only happens through relationships.”

“I’m glad we’re moving in that direction as a denomination,” he said, including becoming “better neighbors” with more and more Native Americans. “Continue to keep us in your prayers,” he asked viewers.

Father, we thank you for calling us to be your hands and feet. We ask you to open our hearts and minds to do your work every day, everywhere, and through everyone we meet. You have placed us here to do your work, and with your help we will gladly obey. Amen.