A love for fly-fishing and radical neighboring 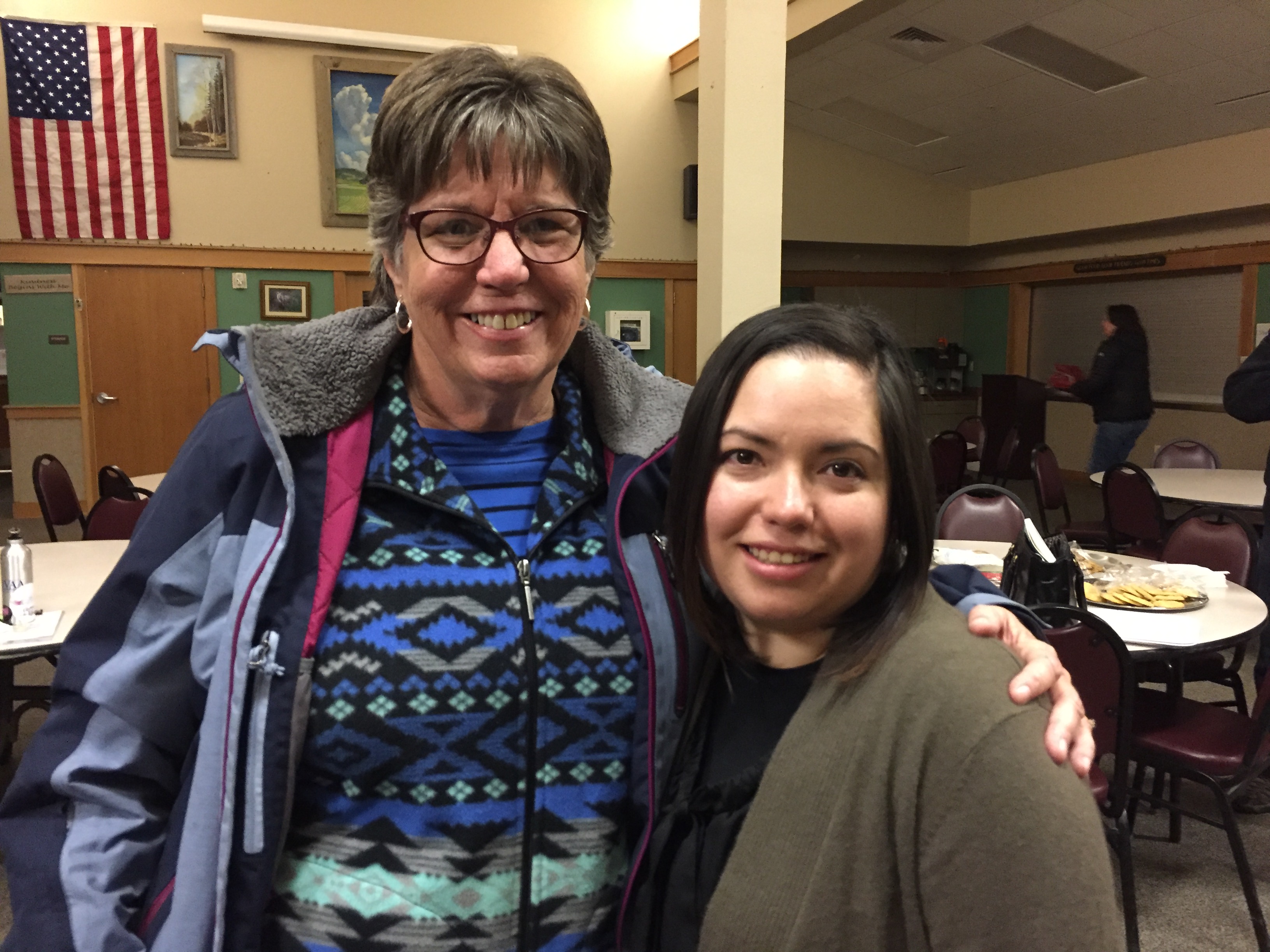 Monica Carillo with her third grade teacher after a community forum on radical neighboring a the Church in Tetons in Driggs, Idaho. Photo by Emily Bilcher

Without a pastor’s love for fly-fishing, Monica Carrillo might still be living in the shadows. And the Rev. Karlin Bilcher might still be unhealthy and depressed, after a terrible first experience in ministry that nearly cost him his family.

Carrillo had been living in Driggs, Idaho, for nearly a decade, after crossing the Arizona-Mexico border when she was 13. Bilcher arrived in Driggs in 2009 to help plant Church in the Tetons — in the fly-fishing capital of the world, which helped him reconsider his decision to leave ministry.

“I’m a degenerate fly-fisher,” he said. “It’s more than a passion for me. It drives me.”

Bilcher was also excited about creating a Christian community that would use their talents and resources as leverage for the poor and lonely—and those on the margins in Driggs.

Carrillo was 21 when Bilcher arrived. Even though she’d been in Driggs for eight years and graduated from high school, she was still living in fear. Undocumented, she felt unable to tell her story — not even to those in the Hispanic-Latino community.

Carrillo remembers what it was like as a child climbing that big border wall, seeing her sister fall, helping her get up and running to hide in the bushes. She also remembers waiting for someone to take them to their dad, who was already in this country.

“We knew Mom was trying to protect us from the violence back home,” she said.

In her new life in the U.S., all Carrillo had was her family — Mom, Dad and sister, and then Marcelo, who came to the U.S. at 19 to work so he could support his mom back home. The couple has two children — a 6-year-old daughter and 4-year-old son.

By 2012, as Church in the Tetons was opening its doors, Carrillo was approved to stay in the U.S. through Deferred Action for Childhood Arrivals (DACA). She received a renewable two-year approval of deferred action from deportation and got a work permit, which meant a better job, and a driver’s license.

She joined the Family Safety Network, where she met Emily Bilcher, the director of client services and outreach —and Karlin Bilcher’s wife. Through Carrillo’s friendship with Emily Bilcher at work, and then Karlin, her life opened up.

“I realized I was no longer willing to live in the shadows,” she said.

Through Carrillo, the Bilchers gained insight into the lives of undocumented immigrants. They began showing up at community meetings on immigration issues.

When the Hispanic Resource Center brought in a lawyer from Salt Lake to help immigrants fill out paperwork right after the 2016 presidential election, the Bilchers noticed that other people from the church were there.

They recruited a few members to help start a new ministry at the church. Based on hospitality and welcoming strangers, they called it “radical neighboring” and invited Carrillo to the church to tell her story publicly.

“I opened up, letting them know who we were, why we were here,” Carrillo said. “It was amazing how understanding and kind people were to us.” 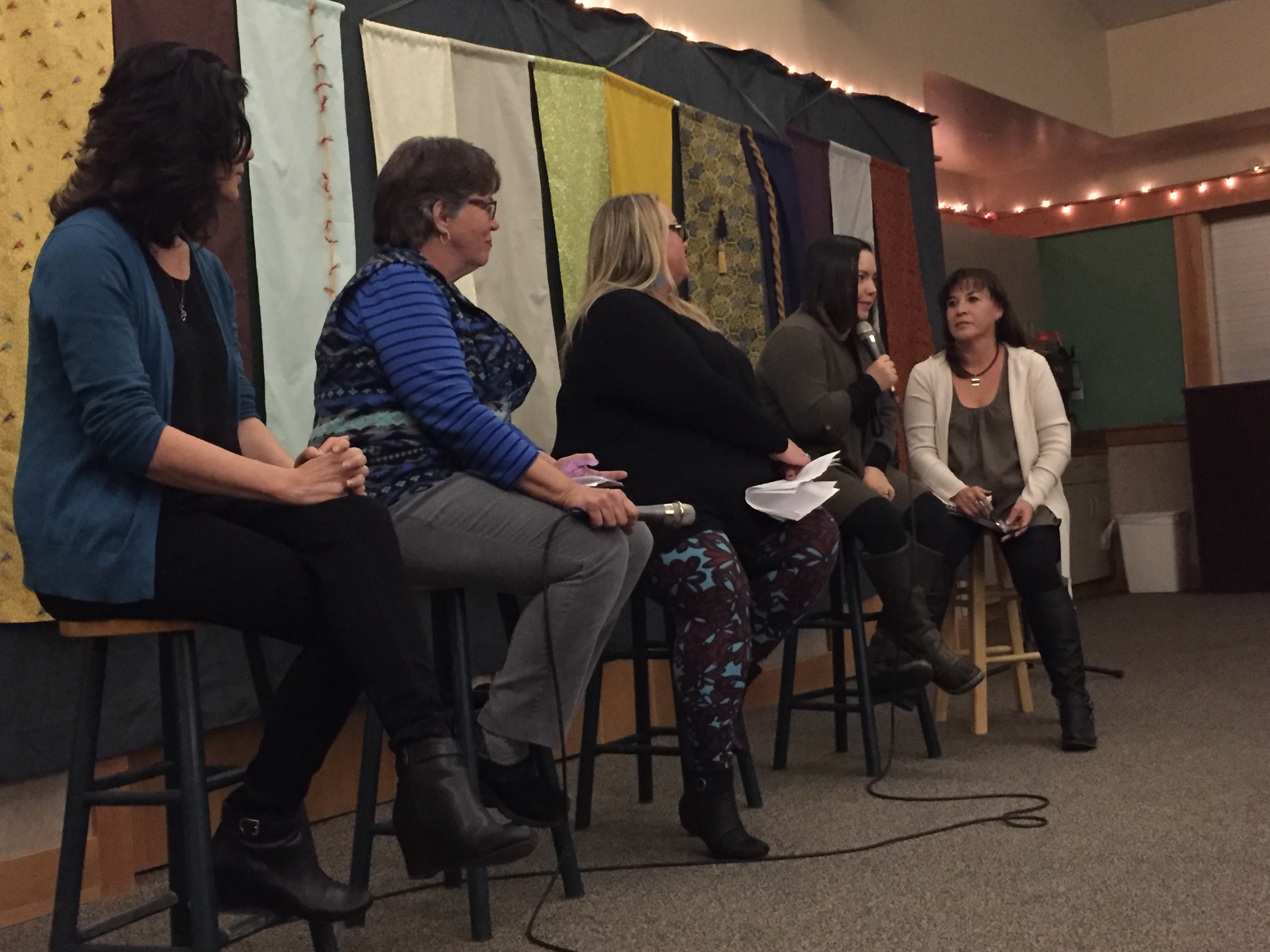 Monica Carillo answering questions at a radical neighboring community forum at The Church in the Tetons in Driggs, Idaho. Photo by Emily Bilcher

Hearing Carrillo’s story, the church held a community forum on immigration to help the town understand the stress and struggles undocumented immigrants face while living in this country. They also began to develop a relationship with the primarily Hispanic Good Shepherd Catholic Church.

Bilcher acknowledges that not everyone at the church, or in the community, is on board with the ministry. But he’s OK with that, because Church in the Tetons, and the town, is made up of a diverse group of people who don’t always think the same way. Some in Teton Valley adhere to a more “God and country, America first” perspective. Others, including transplants to the valley from the West Coast, are at times more open to participating in the immigration conversation.

Recently, a young couple called Bilcher because they’d been hearing about the radical neighboring ministry. They’d never been to church in their lives, but they wanted to know what it might mean for them for them to come — and what might be required of them.

“They had absolutely no idea,” said Bilcher. “But in a way, they reflect both our community and church in that we don’t know much about the lives of people who are different than us.”

Church in the Tetons and Good Shepherd Catholic Church are inviting the community to join them for a day in a park this spring. While enjoying tamales and hot dogs, playing kickball and learning each other’s names, people will have a chance to laugh and enjoy each other’s company. The hope is that the issues immigrants face will become personal for more and more people — just as they became personal for the Bilchers when they met Carrillo.

“You feel it your gut,” Karlin Bilcher said. “She has children the same age as our children.

“If anything happened to her or her family, we’d have to look in the faces of Brianna and Brian and answer their questions of ‘what happened?’”

Church in the Tetons received a $100,000 grant from Presbyterian Mission in 2009, which helped Bilcher plant the only mainline, Christ-centered, mission-focused Christian church in the region.

Gracious God, we give thanks for those moments when we can see the good fruit of the work we undertake in your name. We are so grateful that new life can arise from loss, and possibility from disaster. We thank you for those who give of themselves so that others might have hope. Amen.