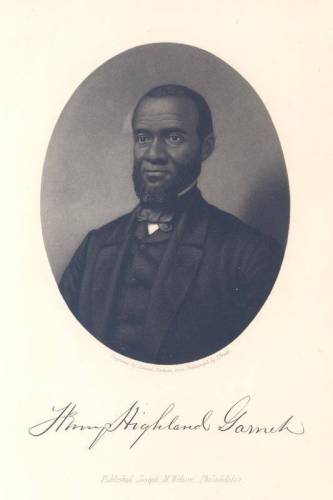 Soon after Congress passed the 13th Amendment in 1865, officially ending slavery in the United States, the chaplain of Congress asked the Rev. Henry Highland Garnet to preach before the House of Representatives on Capitol Hill.

In many ways, Garnet was a logical choice for the Sunday worship service. The 50-year-old pastor of Washington, D.C.’s Fifteenth Street Presbyterian Church had escaped slavery as a child and grown up to become a leading abolitionist and orator. And yet Garnet was also an ardent and dedicated political activist who did not hold back when speaking out against injustice — no matter the audience.

Garnet’s sermon of Feb. 12, 1865, “Let the Monster Perish,” detailed stark truths about slavery’s lasting legacy and listed future steps needed for a just society, including full enfranchisement and education. Garnet said the work of emancipation is not complete until the “burdens of war and the blessings of peace are equally borne and enjoyed by all,” and asked the gathered Congressmen to see emancipation as an opportunity to live into their Christian faith and make manifest the love of justice seen in the Bible.

Though Garnet’s full vision of emancipation was not immediately realized, his ideas found expression in the 14th and 15th Amendments, which would enshrine wider citizenship and voting rights during Reconstruction. Those changes to the U.S. Constitution laid the groundwork for Civil Rights legislation in the mid-20th century and remind Presbyterians today of the enduring blessings of justice.

Heritage Sunday is an annual day of celebration set aside by the General Assembly of the Presbyterian Church (U.S.A.). Download past bulletin inserts and learn more about Presbyterian history at history.pcusa.org/hs.

Gracious God, grant us the humility and strength to follow your call wherever it may lead, whether close to home or on distant shores. Amen.