Because it’s relatively nearby for tens of thousands of Presbyterians and because it’s the site of the 224th General Assembly next year — and also because it’s an important American city with big-city challenges and innovations — Baltimore is the site for Big Tent Aug. 1–3, one of the Presbyterian Church (U.S.A.)’s signature events.

The Big Tent theme is “A Movement Beyond Institution,” a theme that will follow through to the assembly the following summer. The biblical text is Romans 12:2: “Do not be conformed to this world, but be transformed by the renewing of your minds, so that you may discern what is the will of God — what is good and acceptable and perfect.”

The last two Big Tent events, in 2015 and 2017, were held on college campuses. This year, participants can find accommodations at two downtown lead hotels near the Baltimore Convention Center. 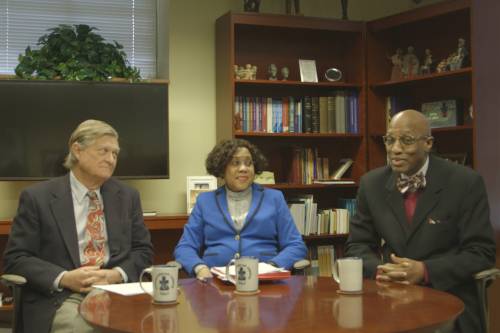 The Rev. Tom Hay, director of Assembly Operations, said during a recent “Coffee with the Clerk” Facebook Live event that he saw proof of what church innovation can do during a recent visit to Baltimore, where he and other organizers met with the Presbytery of Baltimore and other community organizations to discuss Big Tent logistics and programming.

Hay visited a Presbyterian church in Baltimore’s historic Federal Hill neighborhood. The church had been in decline, and so it agreed to share an associate pastor with a nearby church — and undertook even bigger changes, including removing pews and carpeting from the sanctuary and switching worship to Saturday night.

“They took important first steps,” Hay told a panel that included the show’s host, the Rev. Dr. J. Herbert Nelson, II, Stated Clerk of the Presbyterian Church (U.S.A.), and the Rev. Dr. Rhashell Hunter, director of Racial Equity and Women’s Intercultural Ministries. “It was an exciting image of what we think Big Tent is as well, a chance to look at what does it mean to rip out the pews and look at white privilege.”

Baltimore, he said, was one of the first U.S. cities decades ago to adopt ordinances enabling redlining, the illegal practice of refusing to offer credit or insurance in a neighborhood on a discriminatory basis. “The ramifications on that city have been huge,” he said. “What does it mean to look inward at who we are and listen with our hearts to the voice of the gospel and of God to move forward to where we need to be? If Big Tent can be part of that movement and voice, that would be exciting.”

The Presbytery of Baltimore, he said, “has a history of engaging justice, redefining what church is and answering the call to the gospel. We come to them as a fellowship of Christians saying, ‘Tell us what you have learned.’ That is becoming more and more the conversation of Big Tent and General Assembly.”

What, Nelson asked his fellow panelists, is “enticing and inviting for me to come to Baltimore?”

“This is the gospel,” Hay answered. “The voice of Christ calls us to stand with people. To ignore that is to set aside where the church is going.”

Nelson invites participants to take in the many Big Tent activities “in your shorts and your T-shirts.”

“This is the opportunity for people to come and learn together, engaging in non-threatening conversations in a venue where that can be spontaneous,” he said.

“This is not the place to look just to the experts,” Hay said, “but to each other. We will be engaged in conversations with people.” Workshops, he said, are still at the planning stages. The slate of learning opportunities will be announced when planning is complete.

“Part of the joy of being in these hotels is the freedom to gather in small groups,” Hay said. “I think the sense of the political state of our country is less about right and left and more about not being able to talk to each other. If we can learn to speak honestly and listen with our hearts, we can put this thing back together.”

“Let’s pack this place out,” he said.

Lord, we are continually surprised and astounded by your abundant presence in our lives. Help us to be open to your working through the Holy Spirit and to recognize when we are being called to your service. Amen.