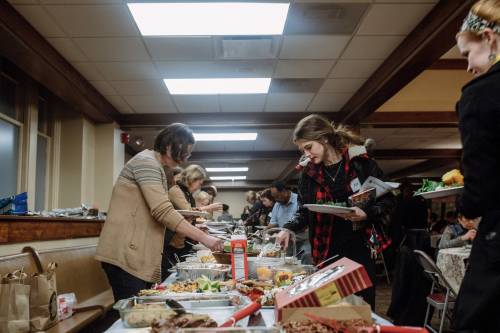 The Open Table KC gathers for dinner and conversation around social issues twice each month. (Photo by Nick Pickrell

When leader Nick Pickrell heard that The Open Table KC would receive a $25,000 1001 New Worshiping Community growth grant from the Presbyterian Mission Agency, he said, “What? What!”

“Honestly, all of this feels surreal,” says Pickrell. “There were eight of us who wanted to create a church we wish we’d had growing up. We wanted a church that was concerned for people living under any form of oppression.”

Four years later, 25 to 30 percent of those at Open Table in Kansas City, Missouri, are people of color and the community is growing in spiritual formation, discipleship and social justice.

According to its website, The Open Table KC is “a community of inclusion, rooted in a Christian tradition of mysticism and liberation. We believe God breaks all chains, boundaries and categories, and we invite others to share in the freedom and challenges that come with this belief. In a world defined by division, we align ourselves with the marginalized and oppressed.” 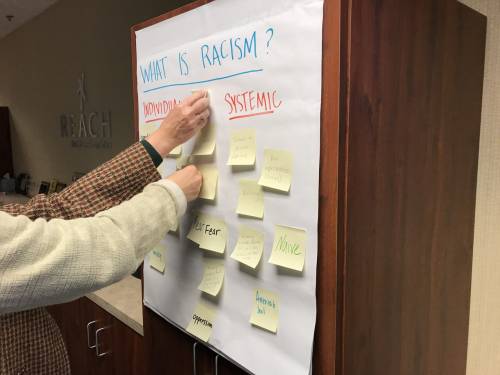 The Open Table’s anti-racism training campaign is helping a variety of Kansas City organizations recognize racism in their institutions and systems — and how to dismantle it. (Photo by Nick Pickrell)

The Open Table was the only church invited to participate in Kansas City Mayor Sly James’ Race and Equity public conversations and training events in 2018. Pickrell was also one of the panelists at a citywide race conversation event held in January.

“We’re helping people recognize the need for a common definition of racism,” Pickrell said. “And how to recognize it in their institutions and systems — and how to dismantle it.”

After training one of Kansas City’s downtown restaurants, Pickrell received a call from the owner who’d been concerned that white servers were quick to call police if they saw a person of color walking around outside his restaurant.

One server had approached him about a person of color with apparent mental health issues talking to himself and pacing up and down the sidewalk.

“What should I do,” the server wondered, “if white customers want to call police on this person, who’s doing nothing wrong?”

“This staff person wanted to let the white customers know that this person is OK to be where they are,” Pickrell said. “Even if he was speaking to himself, that doesn’t mean he should disappear.”

Stories like these leave Pickrell proud, but humbled. Increasingly, he recognizes how racism affects everyone.

“We’ve all been socialized into racism since we were born,” he says. “Racism isn’t just about black or white. White supremacy affects everyone.”

Recently, The Open Table KC received a $30,000 Paragon Grant from the Synod of Mid-America to develop transformational and experiential discipleship curriculum.

The curriculum will include practicing habits for self-transformation to create capacity for a person to love God, self, friend and enemy.

Twice a month, The Open Table KC gathers in the Fellowship Hall at Second Presbyterian Church for dinner and conversation around social issues. At one of their antiracism gatherings, 170 people came.

“We can’t call ourselves a community of peace and reconciliation in a city divided, without addressing America’s original sin of racism,” says Pickrell.

“We care very much about the political, social and economic nature of Jesus — which led him to speak in parables and organize people like the tax collectors to work for the liberation of the oppressed in his day.”

“Religious and nonreligious folks identify with the work we’re doing and are now participating in doing good for the community.”

While Pickrell primarily focuses on running Open Table and community organizing, co-leader Wendi Brackhaus works on spiritual development. She is a member of the 2019 1001-Vital Congregations national conference, which will be held in Kansas City on Oct. 13–17.

God of all people and cultures, we give you thanks for the world you have created and called good. May we align our wills with yours and be able to see others through the eyes of Christ. In our time, let us experience the reality of equality, peace and joy as we live together as sisters and brothers in the faith. In the name of Jesus Christ, through whom you have reconciled the world to yourself. Amen.