A lion running around the world 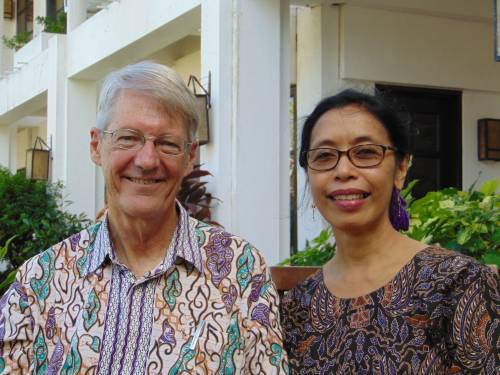 When I was little, my family took me on a trip to visit my uncle and aunt in Africa. They were both medical missionaries in Rwanda. We visited a game preserve where we watched lions, elephants and other wild animals from our Jeep. One night, my parents told me that the house we were sleeping in was right on the equator. I asked, “What is the equator?” My dad said it was an imaginary line running around the world. But what I heard him say was that it was “a lion running around the world!” I imagined the lion running around our house all night. I didn’t think it was Aslan, but more likely the devil, waiting to devour me.

Today, there really is a lion running around the world waiting to devour us, and its name is Fear. Fear, prejudice and hatred leap from country to country, demonizing those who are different, attacking those perceived as a threat, turning neighbors into enemies, sisters and brothers into demons.

In Indonesia, after the fall of Soeharto, from 1998–2002, Farsijana and I saw peaceful neighbors turned into killers when fear seized them, and they thought that all they held most dear was threatened with destruction. Later, they said Satan had gripped them.

We’ve also seen the demons tamed and the fears dissolved, as Muslims and Christians in Indonesia rediscovered not only their common humanity, but also their deep relationship as children of God.

Farsijana and I have been traveling around the U.S., speaking at churches and universities, sharing what we have learned as PC(USA) mission co-workers in Indonesia.

Why does the U.S. need Indonesia? For some, the first things that come to mind are abundant natural resources, an increasingly educated labor force, an expanding market and a rapidly growing tourist industry.

But these are not the primary strengths of Indonesia. The true wealth of Indonesia lies in the rich diversity of its ancient civilizations, religions, cultures and people. Indonesia includes the largest Muslim population in the world but also a long history of interreligious tolerance. Could Indonesians help Americans tame their lions of fear and hatred?

Islam is experiencing a renaissance in Indonesia. Today, there are more Muslims in the world than the combined populations of China and the U.S. Tomorrow, almost a third of the world will be Muslim. Should this be a source of fear or of hope?

What is the future of Muslim relations with the West? Is Islam the enemy of Christianity and the West? Western fears appear to be substantiated by suicide bombings and waves of refugees. But anyone who has lived in a Muslim society knows that most Muslims do not approve of terrorism. Many are honest, friendly, generous and kind to their non-Muslim neighbors. In Indonesia, the growth of conservative Islamic piety is accompanied by the healthy growth of a flourishing Church. The future of Muslim-Christian relations in the world may be determined by how well we resist together the lions that are running around the world.

Western fears of Islam are equaled by Muslim fears of the West. Indonesian Muslims are proud to live in the largest Muslim country in the world and alarmed by the anti-Islamic rhetoric coming out of Europe and the U.S. Talk of banning Muslims from the U.S. or driving them out of Europe does not stem the flow of immigrants but caters to the interests of the small minority of Muslim jihadists who imagine a world that is polarized between Islam and the West.

When I was a boy visiting Africa, my dad gave me a carved wooden rhinoceros because he said I was like a rhino, always charging into trouble. I soon broke off the wooden horn by charging the rhino into immovable objects. Perhaps I was like that rhino, charging into Indonesia because I thought the Indonesians needed me, whereas it was I who needed them.

I came to the end of my service with the PC(USA), officially retiring at the end of December 2018. Farsijana will continue as a PC(USA) mission co-worker. I will continue to serve as her chief partner. Thank you for your support for our work.

O God, we ask your blessing on those whom you have called. Strengthen them in this important service even as they strengthen the church through their work. Amen.