No foreign occupation, but remains of war still visible in Thailand

Although Thailand is the only Southeast Asian country to avoid colonial occupation, it did not escape war and the scars are still visible. 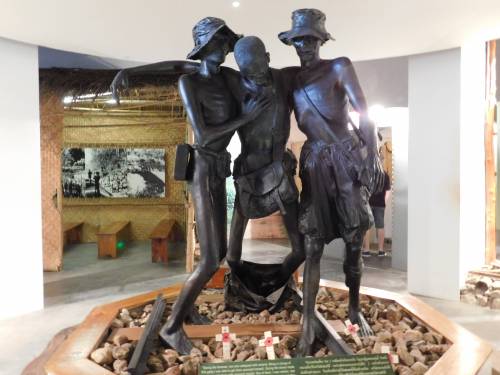 A sculpture inside the Death Railway Museum shows the malnutrition, illness and exhaustion prisoners suffered. (Photo by Kathy Melvin)

Mission co-worker the Rev. Sharon Bryant, serving in Thailand, often takes faith groups to an unusual museum in Kanchanaburi, in northern Thailand. The Death Railway Museum is a privately funded project built to provide an unbiased, accurate account of the story of construction of the Thailand to Burma railway built by the Imperial Japanese Army in 1942–1943.

Estimates are that 90,000 Southeast Asian civilian laborers died, along with 12,000 Allied prisoners of war during its construction. Some 790 Americans died, with significantly higher numbers of British, Australian and Dutch soldiers. The line stretched 258 miles from Burma (now Myanmar) and Siam (now Thailand) in order to provide a shorter and more secure supply line. The jungle terrain, hills and areas of solid rock, along with extreme weather conditions, brutality and disease, were responsible for most of the deaths.

“I take Americans there because most have seen the movie (“The Bridge on the River Kwai”) but don’t know the whole story,” said Bryant. “It is a dark side of Thailand’s past that they are trying to make right with the help of the British and Australian people. It also shows the lengths Thailand went to remain ‘free’ as a nation: occupation by the Japanese, the surrender of vast territories to the French (Cambodia and Laos) and the British (Malaysia and parts of Burma). And it warns us not to romanticize war.”

The 1957 movie by David Lean was adapted from a 1954 novel by French writer Pierre Boulle. It has become a classic film, starring Sir Alec Guinness and William Holden. The story details how Japanese captors force British soldiers to build a bridge of strategic importance over the river Kwai. The regimental tune whistled by the soldiers in the movie is known throughout the world. The WWII events are true, but some of the story is fictionalized. Boulle was in a prison camp in Hanoi, and some of the elements reflect his own experiences. At the prison camp he also met and heard the stories of POWs who had worked on the Burma railway. 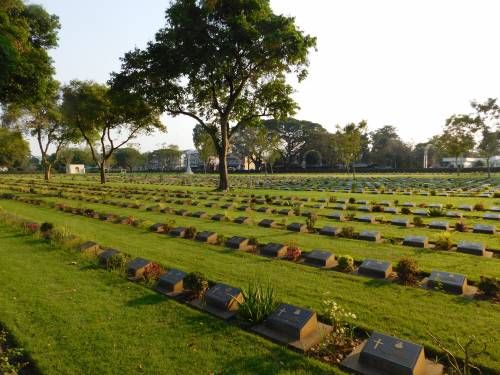 The Kanchanaburi War Cemetery is the final resting place for some of the 12,000 Allied prisoners who died constructing the Thailand to Burma Railway. (Photo by Kathy Melvin)

The Japanese were forced to bypass sea routes when their naval strength was reduced in the Battles of the Coral Sea and Midway in May and June 1942. Once the railway was completed, the Japanese planned to attack the British in India as well as the roads and airfields used by the Allies to supply China.

The museum was completed in 2003. It includes a timeline of the railway, planning and construction logistics and  a personnel database of servicemen who worked on the railway and died as prisoners of war.

Just across the street from the museum is the Kanchanaburi War Cemetery, the primary prisoner of war cemetery for victims of Japanese imprisonment who constructed the railway. There are nearly 7,000 graves.

Just a short drive from the museum and cemetery is the Hellfire Pass Interpretive Center and a memorial to the soldiers who died there. Hellfire Pass is the largest rock cutting on the railway and in a remote area. Workers lacked proper construction tools and were given little, if any, food, water or medicine. Sixty-nine men were beaten to death by Japanese guards in the 12 weeks it took to build the cutting. Many more died of cholera, dysentery, starvation and exhaustion. Visitors leave small memorials along the path, and there is a permanent black-stone pyramid installed that reads, “To all who suffered and died in 1942–45.”

Mienda Uriarte is the coordinator for World Mission’s area office for Asia and the Pacific. She had visited the museum and Hellfire Pass before with Bryant and other groups but felt the same rush of emotion she did on her first visit. “In the same way that tragic U.S. events give shape to and inform the way in which we see the rest of the world, I think it’s important for folks to know a very dark period in the history of Thailand. I think U.S. perceptions are painted with images from movies (e.g., ‘The King and I’ and ‘The Bridge on the River Kwai’) and that provides a very limited scope of focus for a true understanding of the people of that nation,” she said. “The Japanese occupation caused deep wounds in all the countries it damaged, and Thailand is no exception, despite having never been colonized. Thai culture and its attitudes toward grief, pain and suffering, torture are definitely shaped by the period of the Death Railway. It’s not necessarily perceptible on an obvious level, but it has seeped its way into the fabric of the Thai way of being.”

Gracious God, give us vision and compassion as we seek to become peacemakers in a world beset with violence and animosity. Multiply our efforts as we seek to follow the call of Jesus, our savior. Amen.