A limping dog and a caring community 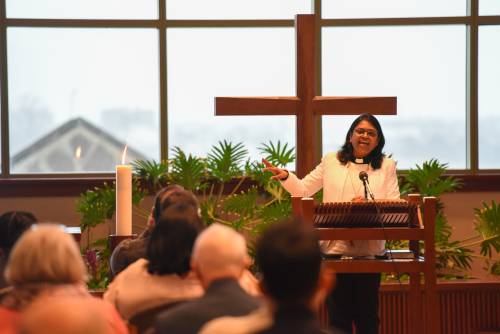 The Rev. Dr. Evangeline Anderson-Rajkumar, a scholar and pastor of two Lutheran churches in Indiana, speaks at the Presbyterian Center Chapel as part of the Week of Prayer for Christian Unity. (Photo by Rich Copley)

Even a limping dog in Bangalore, India, has something to teach us about justice, the Rev. Dr. Evangeline Anderson-Rajkumar told worshipers at the Presbyterian Center Chapel in Louisville during this year’s Week of Prayer for Christian Unity.

The theme for the week was “Justice, and only justice, you shall pursue.” It’s taken from Deut. 16:20, which concludes, “so that you may live and occupy the land that the Lord your God is giving you.”

Anderson-Rajkumar, pastor of Gethsemane Lutheran Church and St. Peter’s Lutheran Church in Corydon, Indiana, said that during a recent Bangalore visit, her brother told her the injured dog belongs not to the family, but to the community.

But a newcomer, thinking he could get rid of the dog if he wanted to, had struck it with a large stone.

“The neighbors came together and said, ‘You have no right,’ ” she said. “The man was shocked the community could come together for a dog, but he learned his lesson.”

Indeed, he had, her brother told her: A few days later, the brother saw the man who’d hurt the dog feeding it cookies. The dog had chosen forgiveness.

“We have so much to learn from a dog,” her brother told her.

“We also have a lot to learn from one another” as Christians throughout the Northern Hemisphere celebrated their unity, she said. Among them: The stewardship of God’s creation “is part and parcel of God’s plan for us.” As Christians work to restore their relationship with the whole of creation, “every little being has a role,” she said.

“As we go up the rungs of the economic ladder, we can’t forget about our relationships and our community,” she said. The prophet Jeremiah delivered a formula that, in simple terms, spells out what we are to do, she said: To know God is to do justice. 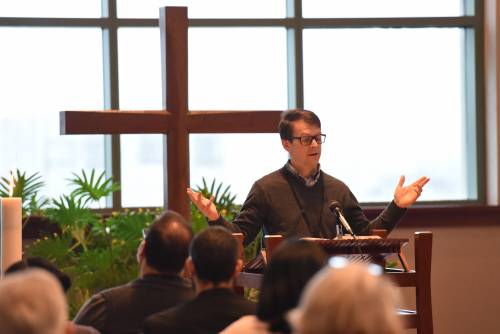 The Rev. John Odom, executive presbyter of the Presbytery of Mid-Kentucky, prays during Wednesday’s service. (Photo by Rich Copley)

“Those are two sides of the same coin,” she said, connecting the terms “humus” with “humanity” and “Adam” and “Adamah,” the Hebrew word for ground or earth. Like the biblical prophets, people of faith “must keep their ear so close to the ground that we can hear the cries of the people for justice and equality. … We can never get tired of doing justice, because this is what God requires of us.”

It’s not that God is looking for cookie-cutter Christianity. “It’s not uniformity that God desires, but unity, community and communion,” she said. “What a beautiful time God has given us,” she said. While all of us “are just a dot” in history, “we are also part of God’s plan ever since God created the world.”

We ought to be “pleading with God to send God’s grace to set us back on track to walk that path of God’s grace,” she said.

Anderson-Rajkumar filled the pulpit for Metropolitan Zachariah Mar Nicholovos of the Malankara Orthodox Syrian Church, who was unable to travel to lead worship.

“One of the great gifts of the ecumenical movement,” said the Rev. Robina Winbush, associate stated clerk and director of ecumenical relations for the PC(USA), “are sisters and brothers who become friends along the way.” When Wednesday’s speaker phoned in sick Tuesday, “I called Rev. Dr. Anderson-Rajkumar and she said, ‘Of course I would be happy to speak to you.’ ”

The preacher brought “a passion for unity and justice for which God has gifted us,” Winbush said, and she’s also “deeply involved in the ecumenical movement.”

Anderson-Rajkumar later spoke on Dalit feminist theology during a brown-bag luncheon at the Presbyterian Center.

Loving and liberating Jesus, grant us the humility to recognize you in others and to receive the gifts that the Holy Spirit has given to communities and churches of whom we know very little. May all our encounters give witness to your transformative and liberating power. Amen.