A message of hope

Saying “Christ is a God of peace,” the general secretary of the National Council of Churches in Korea says he finds reasons for hope in the most recent inter-Korean summit. 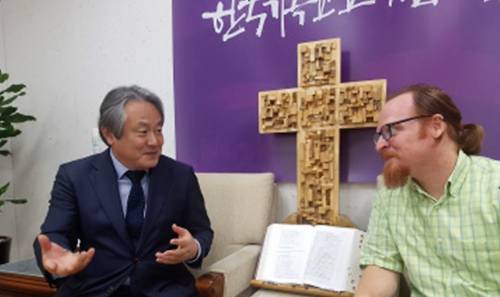 That summit took place in September, when South Korean President Moon Jae-in visited Pyongyang for the second inter-Korean summit since his election in 2016. Since that election, his leadership has brought hope that the state of war might finally end soon. For this summit, the leaders of both Koreas focused on the agreement in section 1.4 of the Panmunjom Declaration, signed at the first inter-Korean summit in April: “South and North Korea agreed to encourage more active cooperation, exchanges, visits and contacts at all levels in order to rejuvenate the sense of national reconciliation and unity … in which participants from all levels, including central and local governments, parliaments, political parties, and civil organizations, will be involved.”

They met their North Korean counterparts — the leadership of the Korean Federation of Religionists, which includes the Christian Federation, the Buddhist Federation, the Cheondoist Church and the (Eastern) Orthodox Church Committee of North Korea. There they discussed how to lead their respective communities into further cultural exchanges.

When Lee returned from North Korea, I asked him where he saw signs of hope from the summit. He responded, “I could feel intuitively my dream for Korea being realized, a dream for harmony overcoming differences. I could feel this dream being realized in the transformation of North Korean society that I observed since my last visit. I could see that North Korea’s social system is not a system of fossilized immaturity, but a fluid, organic system that responds to new trends and pursues change in accordance with the flow of history.”

He said he also saw hope in the way that Chairman Kim Jong Un took risks that would have been unthinkable for an unassailable dictator. Not only did Chairman Kim open up the possibility for a South Korean president to speak to the North Korean people unfiltered, but he bowed his head when greeting President Moon in front of the stadium audience, and then he spoke honestly about scarcity in his country. This does not mean that everything is fine — 70 years of war and hatred cannot be healed overnight — but surely a new way and a new hope have now opened.

I also asked Lee what concerns might remain for the future of the peace process, and where our communities should focus in the future. He said he hoped the U.S. will no longer use its force as a great power to make one-sided demands but will instead follow the peace process with reciprocity. Corresponding measures would significantly increase mutual trust and would help guarantee that the Korean peninsula will not turn the clock back to the time before the Panmunjom Declaration of April.

He also said Korean Christians have a similar responsibility. The South Korean church itself is divided in an internal conflict that could persist even after a peace treaty is signed. One side is using missionary activities, refugee ministries and condemnation of human rights violations to “reconstruct” a North Korean church based on the implicit goal of abolishing the current North Korean system. The other side honors the existence of the Korean Christian Federation in North Korea. Its missions focus on a theology of peace and relationship-building to restore mutual trust that cultivates an environment that is necessary both for a peace treaty to end the war and as a first step to end human rights violations in both South and North Korea. He sees hope in those within the Korean church seeking reformation in the spirit of seeking confession and a renewed commitment to God’s vision for peace.

He said his visit to North Korea, Pyongyang and Mt. Baekdu reminded him that “Christ is a God of peace. It is God who heals and reconciles enemies, breaking down walls within God’s own body, God’s people. In this body there is equality and love, where justice and peace kiss each other; there God makes the two into one, harmonizing differences. This God is a God who lies upon the cross, traversing the gap of Korean division and the original sin of the South-South conflict, inviting us all to step with him across the boundaries of Korean division.”

O God, inspire us to see your image in all people. Guide us to honor your image by treating everyone we encounter with honor and respect. Lead us to love one another as you love us. We pray in the name of Jesus. Amen.