The harvest of God’s love

Our call is toward mercy, not profit 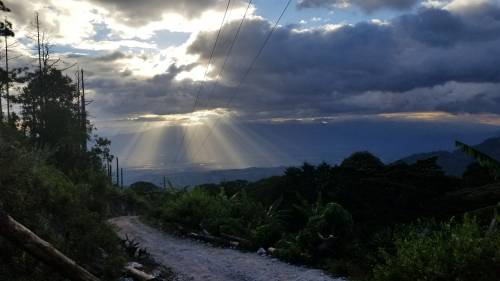 Sunlight breaks through the clouds over Honduras. (Photo by Dori Kay Hjalmarson)

Pastor Juan Rodas, moderator of the Presbyterian Church of Honduras, loves to tell the story of how two remote churches, El Horno and El Sute, joined the denomination. The communities of these churches are at the top of a mountain in the department of Comayagua, Honduras. They are so remote, so small and so economically poor that the utilities that built electric transmission lines overhead, crossing the mountaintop, didn’t bother to connect the communities to the lines. Most people in the communities are of indigenous Lenca descent and are farmers, of coffee, mostly, and of corn, beans and other staples. There are roads, but not good ones, so most people walk, or if they’re well-off, ride mules or horses. It’s a five-hour walk to the nearest paved road.

When Pastor Juan began visiting, another denomination’s missionaries had evangelized in the area a few years earlier and established one small church in El Sute and then another in El Horno. The young, small churches were going strong, but they were hoping for more connection and were seeking to join a larger denomination. Pastor Juan and his colleagues had visited several times to assess the viability of the tiny communities joining the Presbyterian denomination. At a meeting of the denomination’s board, they had decided that the communities were, sadly, too remote and would stretch the small denomination too thinly. At the time there were only about 20 congregations nationwide. The denomination’s leaders couldn’t imagine committing to the pastoral presence needed in such a remote place.

Pastor Juan and his father-in-law, Pastor Edin Samayoa, arrived in El Horno after walking five or six hours with the intention of informing the congregations’ leadership of the decision. Some church elders sat and had coffee with the pastors and related the story of how their churches came to be. The missionaries who came to evangelize years prior had been from a larger denomination. They had spent the time they needed to preach the gospel in the towns, but when it came time for the churches to become independent, the missionaries left, saying they couldn’t join the larger denomination because the communities “no son rentables.” In English: The communities weren’t profitable. They wouldn’t be worth the investment of time and effort of a larger denomination. El Horno and El Sute were drains on the resources of the missionaries.

When Pastor Juan tells this story, he nearly always has tears in his eyes. He says that he changed his mind on the spot and couldn’t see his way to telling the dedicated Christians of El Sute and El Horno that they weren’t worth his time. Pastors Edin and Juan returned to the leadership of the denomination with the news that they had two new congregations. “What? I thought we decided the opposite!” they protested.

I love the affection that Paul shows for the church in Philippi; it reminds me of Pastor Juan’s affection for El Horno and El Sute. “This is my prayer, that your love may overflow more and more with knowledge and full insight … having produced the harvest of righteousness that comes through Jesus Christ for the glory and praise of God.” How telling that the harvest he speaks of is not of financial or demographic increase but of righteousness, glory and praise.

After 10 or 15 years, the churches of El Sute and El Horno are shining examples of community cooperation and unity. They are represented in the denomination’s leadership. They have collaborated with U.S. Presbyterians to install solar panels and water purification systems in their communities. The students they send to the denomination’s theological education programs are the most dedicated and studious. The presence of the churches has helped encourage investment in coffee and food production rather than in illegal drugs. Family unity and cohesion has increased.

El Horno and El Sute are examples of the transformative power of God’s love.

Holy Trinity, you bring abundant life. We pray that your liberating love and word transform lives so that they may know your glory has broken down all barriers that divide. In the name of your great freedom we pray. Amen.