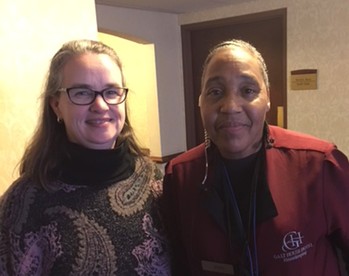 Martha Miller (left) and Nadine at the Galt House Hotel in Louisville, Kentucky.

When I arrived in Louisville, Kentucky, for the Association of Presbyterian Church Educators Annual Event in January, my mind was focused on the details. As co-chair of the conference, I had a stack of lists on Post-It notes, and my concerns were more focused on the schedule than they were on whether God’s presence would be felt. But without a doubt, God was there.

Late Wednesday morning, the day the conference began, I had to go back to get something from my room at the Galt House Hotel. As I was heading back to the Grand Ballroom, I walked to the elevator bank where the housekeeping staff member who was vacuuming the floor suddenly stopped her work. She had noticed my nametag and asked if I was connected to the conference that was taking place two floors down.

When I told her that I was a part of the team that planned the event, her eyes lit up. She walked toward me, introduced herself, and told me that she was thrilled to be singing with the choir that would be performing the next night for the conference. She told me how thankful she was to have the opportunity to tell her story and sing for our group of 700. Having lived in Louisville for 11 years previously, I knew right away what her participation in the choir meant. The Down by the Wayside Choir is a gospel choir composed of recovery clients of Wayside Christian Mission, a safety net for Louisville’s homeless.

Nadine’s enthusiasm about the upcoming performance was only overshadowed by her excitement about her accomplishments. She was eager to tell me about how she had been clean for three years and gave all the credit for her turnaround to God. She exuded joy at how her life had improved and, in addition to telling me how much the choir had made an impact, she was also quick to tell me about the ministry of the Galt House Hotel in employing the formerly homeless as well. For two years, Nadine has served on the housekeeping staff.

And in that relatively short conversation, the conference became different for me. The lists of details didn’t seem to matter as much. With a conference theme of “Deep and Wide: Boundless Hospitality,” I had been prepared to offer hospitality and to assist participants in exploring Matthew 25:35. In fact, in inviting the Down by the Wayside Choir to perform, our hope was that participants throughout the country might explore ways of replicating this ministry. Instead, I was reminded that God is always moving regardless of, and in spite of, our plans and lists. The sermon was different than the planned script. God’s boundless hospitality was made clear through an exchange with one of his beloved children, and I will never forget it.

Watch the Wayside Christian Mission Down by the Wayside Choir join the Humanity Passport Choir at the 22nd annual Festival of Faiths in Louisville, Kentucky, in April 2017 – Video URL:  https://youtu.be/wwceQG6Ujvk   (Nadine is in the front row, fourth from the left.)

O God, you are the friend to whom all can come. You give us more than we can ever know, and you give it freely and abundantly. Help us to see you in the faces and lives of those with whom we work, that while we minister, we also may be ministered to. In Jesus’ name we pray. Amen.