Presbytery of the Twin Cities Area

Women’s Space: Ministry for the Marginalized 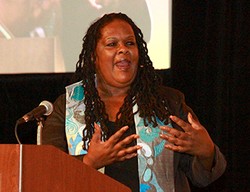 In Minneapolis, Kwanzaa Community Church’s Northside Women’s Space is reaching some of the most marginalized people in the community—women and children who are facing homelessness and precarious housing, poverty and unemployment, and those struggling to break the chains of sexual exploitation, prostitution and sex trafficking.

“On the north side of Minneapolis, we see poverty, violence, sexual exploitation, food scarcity and hunger on a daily basis,” said the Rev. Alika Galloway, co-pastor at Kwanzaa, a church started in 2002 as a new church development of the Presbytery of Twin Cities Area.

“At Northside Women’s Space, 46 percent of the women we see exchange sex less than once a week,” she says. “This is important—this isn’t a way of life for these women; this is a means of survival.”

Not knowing how to start a new worshiping community didn’t hinder Galloway—she knew there was a need to be met.

“I did know how to listen to women’s stories, and that was a critical piece for our community engagement work,” she said. “Women hold the history of the community, but they also hold the current knowledge of the community and the heartbeat of the community. I knew that’s where I needed to start when we arrived here.”

Hearing God’s call to community engagement, Galloway began spending time in the early morning hours—often between 4 a.m. and 5 a.m.—working to build relationships with the marginalized women who were struggling on the north side of the city.

“For some time, I got up early while my husband and babies were still in bed, and I would travel to the north side of the city and just sit outside on the steps and watch these women,” she said. “Finally, one morning a woman walked by and she just looked tired. I invited her to have a seat with me and as she sat, we began to talk. Slowly, we began to build relationships and we shared conversations about the struggles they were facing. I began to analyze what I was hearing, trying to figure out how I could begin to serve.”

The ministry of Kwanzaa’s Northside Women’s Space grew from Galloway’s engagement with these women as they sat together on the stoop. Today, Northside Women’s Space provides respite, short-term intervention and safe connections to help the women and children they serve get from wherever they are in life to where they want to be.