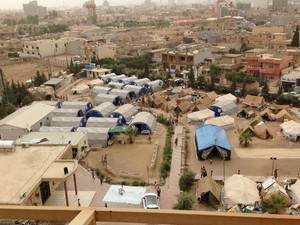 On any given day, headlines from the Middle East paint a grim picture: Rocket launches and retaliatory strikes. Kidnappings and executions. Entire groups displaced from their ancestral homes.

Yet a different story emerges when speaking with the Rev. Scott Parker, a Presbyterian Church (U.S.A.) staff member serving in the Middle East. He and his wife, the Rev. Elmarie Parker, World Mission’s regional liaison for Syria, Lebanon and Iraq, have been serving in Beirut, Lebanon, working to build bridges between Middle Eastern and U.S. congregations.

Though life for Christian workers in the Middle East is somewhat complicated, Parker believes their presence is essential and respected. “Christians, and specifically Presbyterians, were part of the people who brought hospitals and universities into the Middle East,” he says. “The work is highly regarded by most people.”

Introducing Americans to the richness of the church’s history in the Middle East, and its continuing mission, is a large part of the Parkers’ work. In her work, Elmarie provides what Scott calls “the connective tissue” that helps build relationships between U.S. and Middle Eastern Christians. She’s also created an academic -level overview of the context of their work, which focuses on emerging issues such as extremism in the region. Additionally, Elmarie often serves as interpreter and guide for visiting groups.

Scott says his role is turning into that of storyteller. With a background in writing and chaplaincy, he believes telling people’s stories is a powerful way to build connections and foster dialogue about the region.

“I started the work [by] investing in relationships with regular people on the ground, like shopkeepers and cab drivers,” he says. “I try to tell people’s stories on Facebook and the Synod [of Syria and Lebanon] website. Those stories have a big impact in helping people in the [United] States have an idea of what life is like here.”

One such story tells how a Muslim neighbor in Syria helped a church continue its ministry to those in need:

Elmarie and I will never see the Aleppo that our Syrian friends grew up in. It was a beautiful city, with about 4 million people and lots of industry, but four years of war has taken its toll. People are still trying to live there, but the water infrastructure has been destroyed, and this makes daily life an even greater ordeal.

It’s the Christian churches—the religious minority—that are addressing the water problem in Aleppo. Churches have taken it upon themselves to drill wells on their property and make the water available to the community. Yusef, the pastor of an Armenian church in Aleppo, tells us that the water lines at his church begin around four in the morning and keep going until after 10 at night, every day.

Last fall, while making his way to the pump one morning, Yusef was praying. He had no idea how he was going to run the pump that day. Everything in Aleppo runs on fuel generators, because the city’s electrical grid was destroyed in the fighting. But fuel is expensive—if you can get it.

When Yusef checked the church’s generator, he discovered that the tank was full. One might think this was a “loaves and fishes” miracle, but what actually happened involves a Muslim man who owns a fuel station across the road from the church. He was always someone who kept his distance from the church, but Yusef learned that it was this man who filled the tank.

Later in the day Yusef found the station owner, thanked him and offered to pay for the fuel. But this Muslim man refused.

He said: “No. I have been watching you. Every day you provide free water for anyone who needs it—whether they are Christian or Muslim, regardless of what political party they belong to. You have loved our community. This is my way of saying thank you.”

This is how Christ’s church is fighting extremism in the Middle East.

Gracious God, we plant and water the seeds, but you alone give the growth to our mission and outreach projects. Keep us faithful in our work in your vineyard. May our labors bear fruit as we help others discover and develop their God-given gifts. Through Jesus Christ our Lord we pray. Amen.