Colossians 1:24 – Paul writes “I am glad when I suffer for you in my body, for I am participating in the sufferings of Christ that continue for his body, the church. God has given me the responsibility of serving his church by proclaiming his entire message to you.”

One hundred years ago today, at the 11th hour of the 11th day of the 11th month of 1918, fighting in World War 1 came to an end. Kaiser Wilhelm had abdicated on the previous day, and the new government of Germany, eager for peace, immediately concluded an armistice agreement with the Allies.

The war did not go out with a whimper, however, as the deadliest battle in U.S. history still raged with fierce destruction that morning. The Neuse-Argonne Offensive had begun on Sept. 26, 47 days earlier. By the time the armistice was declared, more than 54,000 soldiers had lost their lives in this battle; 26,277 of them were Americans who had volunteered for service. 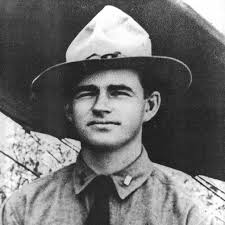 First Lt. Thomas McNeill Bulla, a Presbyterian minister of Word and Sacrament serving as an Army chaplain, was among those who had given his life less than a month before.

Bulla was born of immigrant parents in the rural area of Cape Fear, North Carolina, in 1881. He attended Davidson College and Union Seminary. Ordained and installed in First Church, Emporia, Virginia, in 1913, Bulla served four congregations simultaneously at the time of his entrance into the Army Guard of Virginia in 1917. In June of 1918 his infantry regiment sailed for France. On Oct. 8,  the regiment joined the Neuse-Argonne offensive.

On Oct. 15,  Bulla’s unit became the lead element in an attack at the Moleville Farm. During the assault, Bulla exposed himself to enemy fire, moving across “no man’s land” to help wounded soldiers to safety and to bring back those who had died. The duty was not required of chaplains – Bulla went forward of his own volition and contrary to orders. On that day, Bulla was struck by enemy fire and mortally wounded. He died of his wounds two days later.

Chaplain Bulla answered in the affirmative to this vow at his ordination:

Do you engage to be faithful and diligent in the exercise of all your duties as a Christian and a minister of the gospel, whether personal or relative, private or public; and to endeavor by the grace of God to adorn the profession of the gospel in your conversation, and to walk with exemplary piety before the flock of which God shall make you overseer?

In fulfilling this vow, Chaplain Bulla suffered and died.

Today, on this 100th anniversary of the end of fighting in World War I, we pause and remember more than 16 million people who lost their lives during the conflict. And as we remember and pray that we will never pursue such horrendous carnage again, may we also remember the Lord’s servants represented by Chaplain Thomas Bulla. He was a servant of peace, proclaiming the entire message of Christ, in the midst of war, sacrificing himself that others might live.

Forgive us, Lord, for the carnage we call war. Heal us and restore us now, O God. May your servant Tom Bulla be an example that enables us to willingly suffer for your church, seeking the fullness of your peace. Amen.