After service of reconciliation, they’re now having dinner together in each other’s homes

The plaque describing the shared history of two Presbyterian Church (U.S.A.) churches is on prominent display for everyone to see as they exit the sanctuary of the 3,000-member First Presbyterian Church in Greensboro, North Carolina. Underneath the Scripture passage declaring “there is neither slave, nor free” from Galatians 3:28 are these words:

“Among the 12 founding members of First Presbyterian Church in Greensboro in 1824 were the enslaved servants of the Rev. William D. Paisley (founding minister) and Robert Carson.”

And then you see the names: Tony, Milly and Molly Paisley and Kezia Carson.

“It’s very hard to say we were slave owners,” said First Presbyterian elder Margaret Arbuckle. “But you can’t move beyond racism until you acknowledge what it is.”

The enslaved members at First Presbyterian could only sit in the church’s balcony, which was the hottest place to be in the summer and coldest in the winter. In 1867, four years after the Emancipation Proclamation was signed, 37 formerly enslaved members withdrew from the congregation — and with the presbytery’s help established Saint James Presbyterian Church.

“The stories we were told is that they were tired of the balcony,” said Saint James elder Lynette Hawkins. “So, they up and left to start our church.”

For 150 years the two churches shared that history and heritage, but neither congregation knew the other very well.

But seeds of change were planted in 2015, when First Presbyterian formed a task force, chaired by Arbuckle, to study the effects of racism in the world. And then in 2016, PC(USA) Co-Moderators Denise Anderson and Jan Edmiston identified racism as a congregation-wide concern. 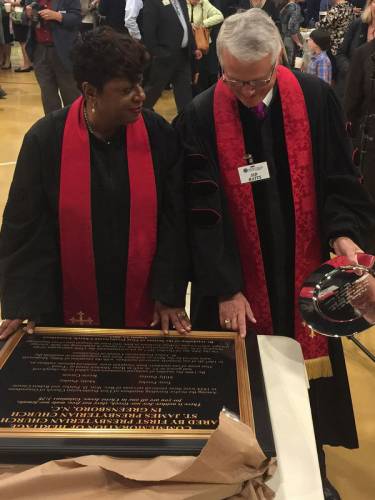 “That helped our session see racism as not just a political, but spiritual, issue,” Arbuckle said.

Arbuckle served on a hospital board in Greensboro with Saint James’ minister at the time, the Rev. Diane Moffett, who is now president and executive director of the Presbyterian Mission Agency.

Knowing the work First Presbyterian was doing on racism, Moffett approached the church about having a joint service of reconciliation, as part of Saint James’ 150th anniversary, to acknowledge how both churches came to be.

“Both congregations needed to understand how wrong it was,” she said, “before we could move forward together.”

To prepare for the joint service, which was held in October 2017, the congregations began holding joint events, watching the PBS series “Race: The Power of an Illusion” and reading books like Waking Up White.

During the service, both choirs sang. Moffett and First Presbyterian’s senior pastor, the Rev. Sid Batts, preached. Together, they participated in a litany of lament, confessing that from the beginning their community had been divided by racial inequality.

Afterward, people lingered. They felt good about what they’d just experienced. Hawkins kept thinking about those who had been enslaved.

“What would they think of us now, forming equal kinds of relationships?” she asked with a sense of wonder in her voice. “By the grace of God, we’ve come a long way.”

“Everyone came through the front door that day,” said Arbuckle. “Only white people sat in the balcony.” 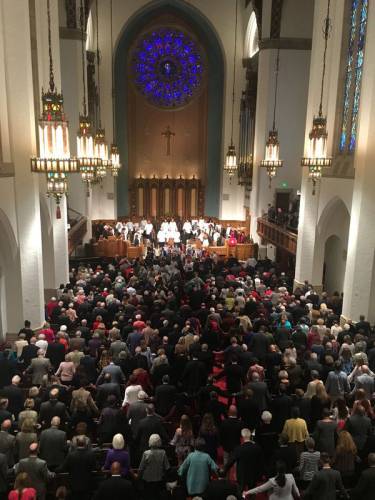 First Presbyterian’s executive pastor, the Rev. Neil Dunnavant, credits Moffett with having the vision of getting the congregations together in a way that brought healing.

When everyone wondered what to do next, she had another suggestion: Form dinner groups made up of members from each congregation to have meals together in each other’s homes.

The meals would give members a chance “to break out of our exclusive boxes, to get to know each other,” Moffett said.

Hawkins and Arbuckle, who helped plan the service of reconciliation, are now having dinner in each other’s homes. They feel as if they’ve broken through the barrier of “let’s talk about this but be nice.”

“If something comes up that we need to address, I can call her,” Hawkins said. “We’ve listened to each other enough to where we can be honest.”

Moffett, who has always had a focus on racial reconciliation in her 30 years of ministry and community work, felt the presence of her ancestors on that day when the two churches came together to acknowledge their shared history.

“As believers and people of faith, we will not be silent,” she said. “We will continue to advocate for love, which is justice in the public square.”

First Presbyterian is also continuing to study and reflect on racism. They are hosting a citywide event later this month with Debby Irving, author of Waking Up White, about the responsibility Christians have to address the impact of racism in daily life, within the structures of communities and churches.

Gracious God, as sisters and brothers come together, we pray that you will wrap your loving arms around each of them as they worship, work and share with one another. In Christ’s name. Amen.