Princeton Seminary professor looks at diversity in book of Acts 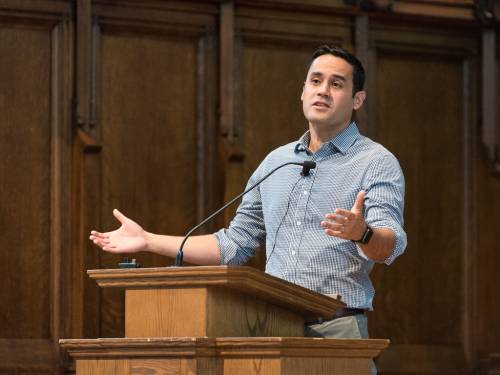 Bounding up to the pulpit with his laptop, Big Tent Bible study leader Eric Barreto cut right to the chase: “We have a problem,” he told Presbyterians gathered in Graham Chapel on the campus of Washington University in St. Louis.

“Even as the church is changing, even as our neighborhoods are changing, we as Christians don’t know quite know what to say in the face of these changes,” said Barreto, an associate professor of New Testament at Princeton Theological Seminary who was born in Puerto Rico and grew up in Slidell, Louisiana. He was leading the first of two Bible studies on the topic “Difference and Diversity in the Book of Acts.”

Barreto showed a video of a Coke commercial that aired during the Super Bowl and featured people of different races singing “America the Beautiful” in various languages. The commercial sparked an explosion of comments on Twitter, including one that asked indignantly, “How dare they ruin the national anthem?”

“For some people, this was a very scary thing,” Barreto said. But diversity is “at our doorstep. By 2040, this will be a nation of minorities.”

Too often, he added, “our solution to social problems is to get rid of all our differences. We think our differences are a problem we need to solve, an obstacle on the way to the church God wants us to be.

“That gets it exactly backwards,” he said.

Barreto delved into Scripture to illustrate his three main points: Differences and diversity are unavoidable; they are indispensable; they are gifts from God.

He cited Jesus’ parable of the laborers in the vineyard in Matthew 20. What the landowner does — paying all workers a day’s wage no matter how long they worked — does not make sense to most of us, Barreto said.

Many read this as a story about how God’s fairness is above human understanding, he said. But the parable is understood differently by Latino immigrants used to waiting to be hired for a few hours of work to feed their families. To them, “it’s a story about God meeting their deepest needs,” about “God’s justice meeting us exactly where we are.”

We need people of different backgrounds to help us understand Scripture and “discern what God is up to in the world,” Barreto said. “When the persons sitting to our left and right look different from us, they can see different things in the text.”

Barreto noted that the story of Pentecost in Acts 2 is often seen as a reversal of the tower of Babel story in Genesis 11, when humans were scattered across the earth to develop different cultures and languages.

“If Pentecost were a reversal of Babel, the disciples would have all spoken the same language” — perhaps some heavenly language God gave them, Barreto said. “God does not eradicate our differences at Pentecost; God embraces our differences. The church starts as a place where people of many gifts are together.”

Both the Babel story and the Pentecost story show that “God is still creating the kind of world God wants” — not one where like-minded people build towers and huddle behind walls to keep others out, but “a place of many languages, a place where walls and towers get torn down.”

Barreto closed with the story of Philip and the Ethiopian eunuch in Acts 8. After Philip explained to him the good news about Jesus, the eunuch asked, “What is to prevent me from being baptized?”

“Lots of things,” Barreto responded. He was a castrated man — a person of ambiguous gender identity, probably a Gentile, and not a protégé of one of the “early-church superstars,” Peter and Paul. Yet God provides an answer, Barreto added. “Nothing prevents him from being baptized.”

In the middle of the wilderness, water appears, and Philip baptizes the Ethiopian man.

Too often the message of the church is “all are welcome — as long as you’re willing to become just like us,” Barreto said. “But the eunuch doesn’t have to change who he is.”

The book of Acts offers a glimpse of “a church where differences are celebrated because God created our differences.”