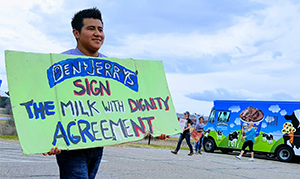 A Milk with Dignity activist stands in protest near a Ben & Jerry’s truck. (Courtesy of Migrant Justice)

In a public letter to the CEO of Ben & Jerry’s, Presbyterian Church (U.S.A.) General Assembly Stated Clerk J. Herbert Nelson, II has implored Jostein Solheim to honor his commitment and sign on to the Milk With Dignity program so changes may take place in the dairy industry in Vermont.

Migrant Justice has been urging Ben & Jerry’s to work with them to end farmworker poverty and dangerous working conditions and to ensure the sustainability of small Vermont dairy farmers through the Milk With Dignity program. 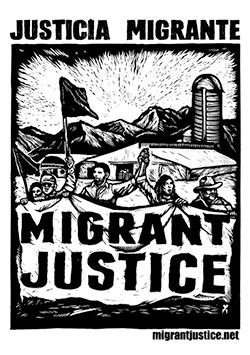 This program was modeled on the success of the Coalition of Immokalee Workers’ Fair Food Program, which uses the power of retail purchasing to elevate human rights in the U.S. tomato industry and defined a new paradigm of Worker-driven Social Responsibility (WSR) that could be replicated.

The WSR paradigm has also been used in the Bangladesh Accord on Fire and Safety and was lifted up in the most recent 222nd General Assembly (2016) policy on ending slavery in supply chains.

Ben & Jerry’s has distinguished itself for its commitment to social justice and had, in 2015, agreed to the Milk
With Dignity program in principle. But to date, the company has not signed a formal agreement that would make Milk With Dignity a reality for farmworkers struggling to survive in difficult working conditions or small Vermont dairy farmers endeavoring to stay afloat in a competitive market.

I am writing on behalf of the Presbyterian Church (U.S.A.) to implore you to honor your June 2015 commitment to enter into a legally binding agreement to join the Milk With Dignity Program developed by Migrant Justice.

With a stroke of your pen, you have the ability to dramatically improve the human rights of Vermont farmworkers and ensure the sustainability of Vermont dairy farmers by joining this program, whose Worker-driven Social Responsibility (WSR) principles have already been proven uniquely effective elsewhere.

The 1.4 million-member Presbyterian Church (U.S.A.) has worked in partnership with the Coalition of Immokalee Workers since 2002 to help bring, now, 14 corporations into the Fair Food Program. The program has been internationally recognized for its comprehensive and swift gains in farmworker rights even as it has helped corporations establish true risk management by eradicating what had been endemic human rights abuses.

When our church’s efforts began with the farmworkers, we were hopeful and dedicated but had to labor in faith for that which was not yet seen. It is hard to describe the joy that has come from seeing these hopes turn into true rights, realized by thousands of human beings, our sisters and brothers, who had been too-long denied.

I share this because Ben & Jerry’s is positioned to inaugurate similar gains in the Vermont dairy industry. Indeed these gains cannot be done without you, because in the Milk With Dignity Program your purchasing would buttress these advances by agreeing to only purchase milk from suppliers that agree to, and are in good standing with, a rights-based code of conduct that has been designed by and for workers.

I urge you, do not delay any longer. Every day is a day that farmworkers continue to suffer, farms are stretched further and your customers grow more impatient. Sign in fact what you have already agreed to in principle, so that these anticipated transformational gains in human rights and sustainability may become a reality in Vermont’s dairy industry.

Office of the General Assembly Communications