A call to love one another

Noor arrived in Europe with two young children and without her husband. She had left her home in Aleppo, Syria, two years earlier because conditions in the war-torn country had made it impossible to live there. Her family felt they had no other choice. During her passage across the Mediterranean Sea, the boat she was on sank with her young children and a group of other migrants. Noor had trained for years as a swimmer so she was strong enough to stay afloat and keep her children safe until they were rescued. But she had tears in her eyes as she remembered one mother who screamed repeatedly for her lost baby.

Those listening to her story were silent as she cried. 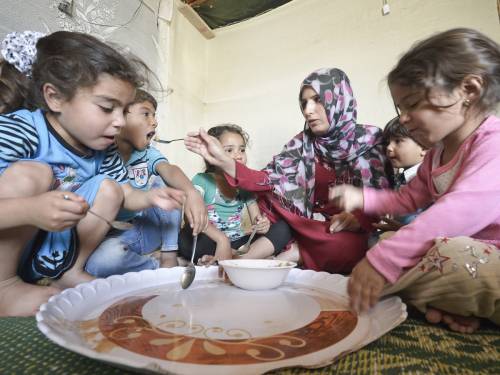 Zahra Al Hussein feeds her children inside her tent in a settlement of Syrian refugees in Minyara, a village in the Akkar district of northern Lebanon. Al Hussein is originally from the Syrian city of Homs. (Photo by Paul Jeffrey / ACT Alliance)

Noor arrived in Germany, but didn’t understand the language. She remembered having to take her young son to the doctor because he had a serious illness, but she couldn’t understand the doctor’s instructions. In those moments, she felt alone and uncertain. Noor decided she had to conquer the language to navigate life in her new country so she studied hard and attended regular German language classes. She told her story in fluent German.

After having been a nurse in Syria, Noor hopes to someday continue her work in Germany.

Someone asked Noor about her family in Aleppo and she fell silent. Another person asked her what she misses about Syria. The tears started to fall. She said she misses everything about Syria. Someone asked her if she’d go back if she could, and she replied, “Yes, of course.” Although she has conquered the language and worked hard to establish herself in her host culture, nothing compares to the idea of life in her home country, her home city free from war. She has lost a great deal but now has a small community of other Syrians and has finally reunited with her husband, who traveled separately from Syria.

The circumstances that brought her to Germany are incomprehensible to most of us. But her story brought light to those who listened. We heard her voice, her hope and her uncertainty. We learned she is more than just a “refugee.” She is a mother, wife, daughter, nurse, swimmer, language learner, culinary creator and human being in search of peace.

As a mission co-worker working with refugees, I encourage individuals and congregations to sit and listen to a refugee’s story. Their humanness will take shape in those interactions. After all, aren’t we all human beings in search of peace?

In many churches, we “pass the peace” to each other every Sunday morning without a second thought. What if we chose to pass the peace to everyone we encountered, not just on Sunday mornings? What does that look like if it’s not just a brief handshake and repeating familiar phrases? Maybe it’s welcoming someone new into the neighborhood. Maybe it’s helping them sort mail in an unfamiliar language, accompanying them to the doctor’s office, finding furniture or helping them navigate unfamiliar systems. Maybe it’s breaking down walls, real and imagined. Maybe it’s following Jesus, who was once a refugee, forced to flee as a baby into Egypt, and who calls us to love one another.

Gracious God, we praise you. May your peace cover the land: Show your compassion anew and bring tragedy to an end. Make your church a sign of your compassion in a hurting world. In Jesus’ name, we pray. Amen.