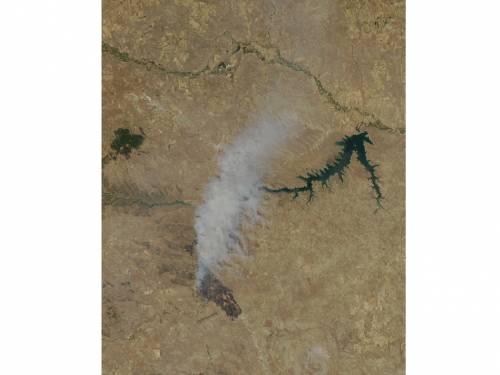 As of mid-August, more than 270,000 acres had burned, and much of that was grazing land, said Goodrich. “Some ranches, already drought-stricken, are in serious jeopardy,” she added.

A hotter-than-expected June dried up vegetation, creating conditions conducive to wildfires, something state officials had not anticipated. Forecasters, meantime, have predicted major wildfire threats through October for eastern Montana, southern California and the western Dakotas.

Responding to the crisis, Presbyterian Disaster Assistance provided a $7,500 grant to the presbytery. Part of the grant was earmarked for a pastoral presence in the impacted communities currently without a pastor.

“The economic impact to the northeastern part of the state is devastating,” said Jim Kirk, PDA’s associate for disaster response, who was in contact with Goodrich. “Farmers have lost their feed and cattle. In some instances, the herds have ended up on ground that has been burned, causing their hooves to blister. When that happens, many cattle have to be euthanized.”

Many ranchers, according to the presbytery, will have to sell off cattle to survive, while others will have to wait two years before calves are ready to go to market. Other ranchers, who are just starting out, are quickly finding themselves struggling to stay in business.

Goodrich says the impact on farmers, ranchers and the communities could extend a generation or two.

“Ranchers whose families have been ranching for several generations have said this is the worst they’ve seen and believe we are headed for another Dust Bowl if nature doesn’t change,” she said. “You look at the vast displacement of people and what it does to the entire food chain and the economy.”

Dan Holland, an elder with First Presbyterian Church of Bozeman, is a cabinet leader with Yellowstone Presbytery. In a prayer written in the presbytery newsletter, Holland describes the feelings of residents impacted by the flames.

“Day after day the thermometer hits ninety and a hundred and they haven’t seen rain in so long, they forget how it feels when those big summer raindrops fall on sunburned forearms,” the prayer reads. “We pray that not another house will be lost, not another barn will be torched.”

Church leaders in the region say people have been working 12 to 14 hours a day not only for themselves, but also to help their neighbors.

“The work ethic for most people in Montana is superb. The ranchers, farmers and businesses work unbelievably hard,” said Goodrich. “If people say they are going to do something, they do it. Most of them don’t work to be wealthy; they’re working to make a living and take care of the land.”

“If they didn’t lose them in the fire, they’ve lost them temporarily after cutting the fences because you never know which direction the flames will head,” she said. “People are coming from neighboring ranches to try and sort out the cattle. If the cattle breed with each other, you have all of these bloodlines that may have crossed, resulting in young calves dropping in winter on the frozen ground.”

The long-term impact of the drought and fires has everyone across the state concerned. Ranchers are feeding their herds with hay that would normally be set aside until October. Many are seeking bank loans in order to survive.

The presbytery has conducted regular meetings with a cluster of pastors in the area for mutual encouragement, prayer and the sharing of ideas.

“If America could capture what we see in these small, rural ranching towns, we wouldn’t have half the problems we have in the U.S.,” said Goodrich. “I wish I could take young people to some of these communities. The resilience, faith and hope of residents, along with the generosity of the small churches in this presbytery, are incredible. They believe that if they don’t give of their money, time, energy and care, this ministry won’t happen.”

O God, our refuge and strength, our help in times of trouble, have mercy on the lands where the earth is under siege. Strengthen those who rebuild hope so that entire communities may face the future without fear. In Jesus’ name. Amen.