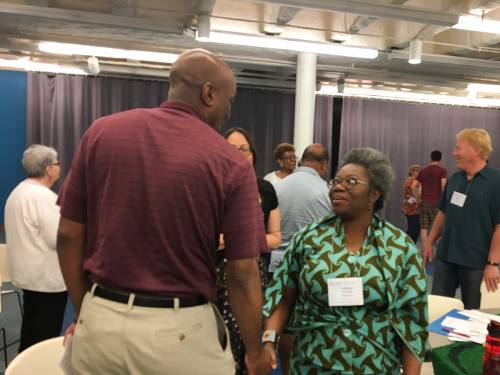 In a room filled with individuals of many nationalities, the Presbyterian Intercultural Network (PIN) tackled the difficult subject of race relations in America.

The Big Tent pre-conference “Coming to America: Some Here, Some Forced, Some Welcomed, Some — Not,” was sponsored by the Racial Ethnic & Women’s Ministries of the Presbyterian Mission Agency and attended by a group of nearly 100 people.

The conference challenged attendees to answer the question: “How does the Presbyterian Church (U.S.A.) catch up with the rest of the country and become a more diversified denomination?” 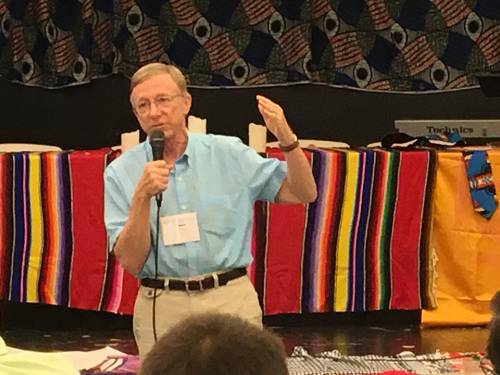 Nibs Stoupe, PIN board member and retired pastor of Oakhurst Presbyterian Church in Decatur, Georgia, said that at least two things need to happen for this to occur. “First, the church needs to recognize the validity and experience of churches that have traditionally been called racial ethnic, and secondly the 93 percent white denomination needs to undergo a reformation in the way we see ourselves and the rest of the world.”

“The church taught me racism,” Stoupe said when asked how a white man born in Tennessee, and pastor of three churches in the South, has developed such a progressive ideology about racism. “I grew up in a segregated church where the cooks and cleaning staff were the only black people in our church. I also grew up in a home where my mother didn’t allow certain behaviors.

“I could never call black adults by their first names and I could not use the ‘N’-word in our house. And because my father was not in our home I came to know a bit of what it felt like to be looked down on or to be marginalized. Other white people in the church taught me to affirm racism and homophobia, but they also helped me to understand that we are all God’s children. I chose Jesus over racism.”

Stoupe said that over time, a Southern slaveholders’ mentality was allowed to capture the gospel.

“That means we use the gospel to condone wrong behavior and we believe it’s only important what happens at the end of one’s life and we didn’t care what happened to them or how we treated them while they were living, just as long as they believed in Jesus so they could go to heaven when they died,” he said.

“When you think about the fact that slavery didn’t legally end until 1965, then it makes slavery very real in many of our lifetimes and we can no longer say that’s something that happened hundreds of years ago,” Stoupe said.

Sharon Mook, co-moderator of PIN, acknowledged, “It’s hard to be white and not racist in America.”

“There is a lack of awareness among whites because we are born into racism,” she said. “By this I mean when you’re white you’re born into a power structure that already exists in this country. The real test comes when you determine how you will participate. One can be an active racist, a passive racist or a recovering racist/active anti-racist working to change the power structure and their personal behavior.”

The pre-conference ended with a worship service featuring the Rev. Dr. J. Herbert Nelson, II, Stated Clerk for the PC(USA). He said the work of PIN and its efforts to address diversity is not only the most important work of the Presbyterian church but of Christians.

“No matter the color of your skin or what brought you to this country and this denomination, we are all God’s children, created in God’s image,” he said. “In order for the Presbyterian denomination to grow, the church will need to welcome everyone and the gifts they bring.”

Nelson said Presbyterian churches have to become agents for community change across racial and socio-economic lines and they have to see God in each other and love one another. He concluded by saying, “To do that we must connect with one another in the heart and in the head; we are all one people.”

God of all peoples and cultures, we give you thanks for the world you have created and called good. May we align our wills with yours and be able to see others through the eyes of Christ. In our time, let us experience the reality of equality, peace and joy as we live together as sisters and brothers in the faith. In the name of Jesus Christ, through whom you have reconciled the world to yourself. Amen.