May the God of steadfastness and encouragement grant you to live in harmony with one another, in accordance with Christ Jesus. … (Romans 15:5) 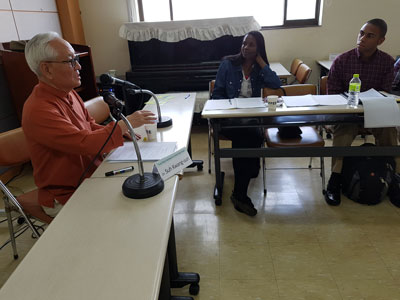 On Aug. 15, 1945, Dr. David Suh and others from the Korean Peninsula were liberated from Japanese occupation. Suh remembers his family returning to Northern Korea. His father resumed his Christian ministry, but under the communist rule of the new North Korea, things would never be the same.

Suh, a retired professor of theology from Ewha University, told his story in a 2016 interview with mission co-worker Kurt Esslinger. Suh’s father was outspoken in preaching liberation and was executed alongside other Christian preachers by the North Koreans. Suh vowed revenge. But in 1962, he enrolled at Union Theological Seminary in New York City. There, he heard Dr. Martin Luther King Jr. speak about peace, and he began to wonder what his Christian attitude should be toward his “enemies,” the ones who killed his father.

He returned to Korea and became involved in the human rights efforts of the National Council of Churches in Korea. He was also ordained to the gospel ministry.

Suh has remained active in peace and unification efforts, attending South Korean and North Korean Christian Federation leaders’ meetings. Before one of them, he encountered the son of his father’s enemy, who asked Suh if he would translate his speech. “I heard a voice tell me, ‘loving your enemy is the new revenge,’” Suh says. And so he provided translation. “It was a small act … and in it, I felt a sense of release from bondage.”

When asked about the shape of things today on the Korean Peninsula, Suh notes, “We were under the Japanese for 36 years. Now we’ve been divided for much longer, for 71 years.

“We need another liberation in Korea. This time we need to be liberated from this military division. I pray that one day before I die I might get on a train from Seoul station with our grandchildren and end up in Pyongyang.”

As we near the end of this Season of Prayer and Reflection (June 25–Aug. 15), we remember the suffering and pray for peace and unity.

2017 Prayer for Peaceful Unification issued by the National Council of Churches in Korea and the Korean Christian Federation:

God of grace, once again we greet the month of August, the month of independence where North and South still celebrate separately and remember it differently. It has been a long, harsh period, one with cruel struggles between the two countries. No longer are we oppressed by Japanese forces, but our people are still filled with contempt for each other and our country is still challenged by neighboring forces. Lord, pity us.

God who rules history, for the last 72 years, we dreamed of being one, but we lived like foes, not living up to our dreams. We lived separated from our family and torn apart by different ideology and systems. Lord, bring the history of our people together with your holy hands. Let us hope for unification with passionate hearts and work together so fervently that we shed the sweat of hope. For every August we encounter, help us sincerely repent with our hearts, and fill us with a strong will for unification.

God who leads peace, Lord, we speak of one people, one sisterhood/brotherhood while filled with hatred against each other. We have violated the spirit of the Inter-Korean Basic Agreement, the June 15 Joint Declaration, and the Oct. 4 Joint Declaration and also firmly locked the doors of Mt. Keumkang and the Gaeseong Industrial Complex. Thus, we were left with a greater danger and greater threat. Lord, listen to our desperate cries that thirst for peace.

God who gives hope, Lord, help us to dream once more of a beautiful land where no joint-military exercise is needed. Let us welcome a new world where we are not interfered with or challenged by neighboring strong powers. Let us once again begin with the same overwhelming determination we had as of Aug. 15, 1945. Please quickly open the doors of intercommunication and let us walk hand in hand for joint prosperity. Lord, let the North and South greet each other without prejudice. Help us newly begin a history of reconciliation and embracement on this land.

Loving God, bestow your grace upon all of Korea. Shine down pure rays of peace from Baekdu to Halla, and wet the entire land with showers of joy. Give happiness to the 80 million Koreans throughout this land and this world, and guide them to be leaders of their own lives. Bring our strengthened community to be servants of the world. God of peace, we pray in Jesus’ name. Amen.