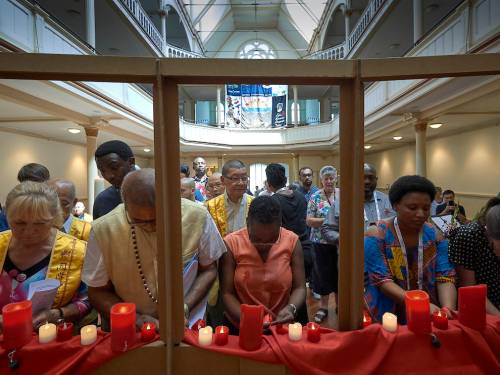 Religious leaders from several traditions place red ribbons, a sign of hope amid the HIV crisis, on a symbolic bridge during a July 23 interfaith prayer and memorial service in the Keizersgrachtkerk in Amsterdam, the Netherlands. Sponsored by the World Council of Churches-Ecumenical Advocacy Alliance, the service was held on the first day of the 2018 International AIDS Conference. (Photo by Paul Jeffrey/WCC)

Faith-based organizations have been at the forefront of calls to accelerate HIV testing and treatment for children and adolescents. As gaps in infection and treatment between adults and children have become more apparent, there are now efforts to “super fast-track” services for children. But will they be enough?

“Part of the problem is that the children are invisible. They can’t stand up and make a noise like others can,” said Stuart Kean, consultant for the World Council of Churches Ecumenical Advocacy Alliance (WCC-EAA). “They are often in families that are missed by health services. It is more likely that these invisible families are present in faith communities, so these play a central role in identifying and helping children get tested and treated.”

Faith-based groups’ advocacy efforts have been essential in establishing the targets set by governments called the “super fast-track” for children, which aims to end the epidemic by 2030.

But the United Nations Programme on HIV/AIDS reports that while almost 60 percent of adults are on HIV treatment, only just over 50 percent of children receive treatment. And a study released by UNICEF estimated that 9.6 million young people ages 15–24 would be newly infected with HIV in sub-Saharan Africa between 2017 and 2050.

However, Kean observed, “the momentum around children which has been woefully lacking in the last 10–20 years has suddenly become galvanized, and the faith community has been a leader in that.”

A high-level dialogue convened by the Vatican in Rome in November 2017, in collaboration with WCC-EAA and other partners, led to an action plan with firm commitments involving pharmaceutical and diagnostic companies, donors, governments, multilateral organizations and organizations providing or supporting services for children living with HIV.

“The two key areas are to try to identify those children who are not yet tested, and we recognize that the testing systems have been woefully inadequate,” Kean said. “And once we have significantly improved identification, the challenge is to get the children on treatment that is palatable and effective for them.”

Progress is being made by some companies on child-friendly medicines and diagnostic systems that have dramatically decreased the time between a test and the result, from 50 days to 90 minutes.

But pressure still needs to be applied to strengthen political will and company action.

The CC-EAA recently launched a children’s letter-writing campaign as an opportunity for young people to learn more about HIV prevention and treatment and speak out on issues.

“My feeling is that it is most effective when young people take the leadership in the education process for prevention and, for those who are living with HIV, for treatment adherence,” Kean said, “So faith groups and their networks of young people have a real opportunity to make an impact.”

One example is an adolescent peer support group in Kenya that is part of the national chapter of the International Network of Religious Leaders Living with or Personally Affected by HIV (INERELA+).

Coordinator Jane Ng’ang’a says the group was formed “when we realized that there were a number of adolescents and young people in faith communities which were not being targeted with existing initiatives.”

From an initial group of 13, the effort has grown to be its own department in the Kenya chapter of INERELA+.

“We trained them on peer mentorship, and they asked for a name to help them in their outreach. They call themselves the ERIS Generation – Encouraging Responsibility, Igniting Self-control.”

Ng’ang’a says they go to schools, juvenile prisons and out on the street with messages on HIV, prevention and hope, and now link with other young people in different platforms in the community.

For Kean, it’s an example of the ways faith-based organizations can step up.

“Faiths have three roles – we’re advocates, we’re community mobilizers, and we have health services. Are we doing the best we can, using our community structures to offer safe spaces for testing? Are we speaking out as religious leaders to tackle the stigma that keeps people away?”

“If we keep our commitments,” said Kean, “we’ll make a real impact.”