IPC and other churches share a common hope for the future

The Presbyterian Church of Colombia is working for a just and lasting peace in a nation plagued by generations of politically and ideologically motivated violence. Since the Colombian government signed historic peace accords with the Revolutionary Armed Forces of Colombia (FARC), a guerrilla group, in 2016, steps toward reconciliation and transformation have been taking place, although more must be done if peace is to be firmly rooted and allowed to flourish for all Colombians.

Members of the Presbyterian Church of Colombia (IPC), together with other churches and community groups, have been working to build patterns of relating with former FARC combatants, as well as continuing to support the victims of Colombia’s conflict, trusting that they share a common hope for a better future. 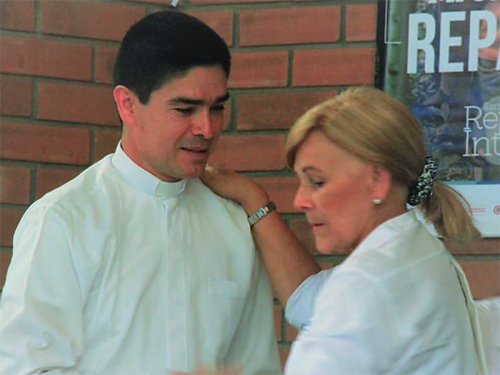 Diego Higuita, general secretary of the IPC, took part in a public ceremony of reconciliation and restitution on July 11 as did Yolanda Pinto, the director of Colombia’s victim reparations program and a victim herself. (Photo Provided by IPC)

The Rev. Diego Higuita, general secretary of the IPC, took part in a public ceremony of reconciliation and restitution on July 11 in his hometown of Dabeiba, which has frequently seen conflict. More than 900 victims of conflict attended and received compensation from the government at the ceremony.

Unfortunately, the reconciliation process is far from over. Neo-paramilitary organizations recently circulated panfletos, a form of open letter that has long been a go-to method of the right-wing militias for publicly threatening those who dare to work for reconciliation and a new future for all Colombians.

The IPC is committed to continuing its public ministry in favor of peace and transformation. Swift political action to fully implement the peace accords from politicians and a continued groundswell of popular support for the peace process will help ensure a better future for Colombia.

Let us not lose hope.

The negotiation of the armed conflict in Colombia was a great advance in dialogue, but it is still a small step towards peace. Peace has hardly been engendered, it must be gestated, it must be birthed, it must be made to grow and then run through the fields and cities. The road to peace is just beginning, and we must implement and fulfill the accords. We need the unhesitating participation of all institutions committed to reconciliation in the country. Given the historical context of our country, we urgently need new models of dialogue where all sectors of society are on equal footing.

From a pastoral perspective, I find a truly refreshing theme for the work of the church and Colombian society today is reconciliation. We are at a tipping point to walk towards peace and reconciliation. I am very struck by this term from the Greek used throughout the New Testament in the writings of St. Paul: Katallásso, reconciliation, is a verb of political meaning, used to represent peace agreements between kingdoms, families or people. This term explains the action in which the victim offers the opportunity for the perpetrator to recognize the damage done and make reparations to the victim. It is a verb with more political than moral significance. It refers to the action that the injured party takes to reconcile with the offender. The rejection of reconciliation is the sin or true act of immorality, of social injustice.

The Colombian people, within the framework of the peace accords between the government and the FARC, have embarked on a long journey. Not only the educational and social institutions but also the ecclesiastical and civil communities are crucial to the reconstruction of the country, with new elements for building life in fullness for all people and peace with social justice.

I don’t know if Isaiah was crazy when he wrote these lines, but perhaps the lion can eat grass and the vipers lose their poison, the wolf and the lamb graze together. What is certain is that it is time to hand over the weapons (weapons that the FARC has already delivered, other actors are missing). It is time to disarm our minds, our hearts, our words, our gestures and let the Spirit of God make the transformations needed so that the Kingdom of Peace may approach the earth. That is why in this public act I invite you as a gesture of reconciliation to share with one another an embrace of peace.

Gracious God, we give you thanks for allowing us to be a part of building a kingdom in which all people are equal. Amen.