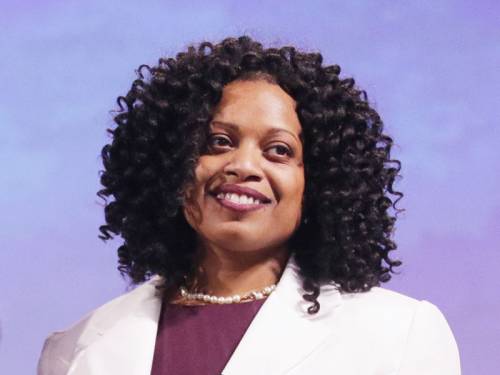 Denise Anderson, Co-Moderator of the 222nd General Assembly (2016) of the Presbyterian Church (U.S.A.), has accepted a new position with the Presbyterian Mission Agency. Anderson has been called as the new coordinator for racial and intercultural justice, working in connection with the agency’s Compassion, Peace & Justice and Racial Equity & Women’s Intercultural Ministries.

Anderson, who recently wrapped up two years with Jan Edmiston as the church’s first co-moderators, believes her new role is a logical next step.

“I see this as a perfect opportunity to not only continue the work that Jan and I were able to dive into as co-moderators, but also to do the work that more robustly connects the denomination in the work of anti-racism and intercultural justice,” she said. “In our visits, churches would constantly ask us what the next steps were on this issue. I see this as an opportunity to work with the denomination on those next steps in more concrete ways.”

During their tenure as co-moderators, Anderson and Edmiston started the dialogue around racial justice by recommending the church read and study Waking Up White, a book by Debby Irving that unpacks long-held beliefs and ill-conceived ideas about race.

“I enjoyed visiting the churches and hearing about their experiences and how they found the readings and discussions rewarding and challenging,” said Anderson. “We found that very encouraging to know that something is taking root and resonating, and that Presbyterians are deeply engaged in what we hope will be meaningful work for the nation and the world.”

Anderson believes the church has made progress in the past few years, pointing to the recent action at the 223rd General Assembly.

“When you have hundreds of Presbyterians from across the country along with local activists marching in the streets of St. Louis on a hot summer day to deliver $47,200 to releasing those charged with non-violent offense who cannot afford their bail, I don’t know any other time in our history that something like that would happen,” she said. “That demonstration is indicative of how much the Holy Spirit has been at work in the denomination.”

Anderson says she will spend a lot of her time on the road meeting with churches.

“We are also looking at the possibility of creating a racial justice network similar to some of our mission networks so that churches within the PC(USA) who want to do this work know they have a partner,” she said. “We want them to understand they are not alone. By networking, we can help break down the silos.”

Sara Lisherness, director of Compassion, Peace & Justice, said she is thrilled to have Anderson onboard.

“Our denomination has made a major commitment to confronting and dismantling the sin of structural racism and white supremacy. Denise Anderson has been a leader in keeping these issues in front of the church,” she said. “She understands how the violence of racism and poverty intersect and gives voice to this in powerful ways. I am grateful that she has said ‘yes’ to this call and look forward to working with her.”

Rhashell Hunter, director of Racial Equity & Women’s Intercultural Ministries, agreed. “We are excited that Denise will join us in ministry,” she said. “Her new work will support the church’s efforts to end structural racism and white supremacy.”

Hunter says Anderson’s work across ministry areas, and with mid councils and congregations, provides a greater opportunity to raise awareness of and address institutional racism in the church. “Her work will help create an environment where people of color, new immigrants and women Presbyterians in congregations, mid councils and other groups can serve fully in ministry and leadership,” Hunter added.

Guide us, O Lord, as we seek to follow you wherever you lead. Hear our prayers for our sisters and brothers in Christ. Surround us with peace, hope and love, and help us to behold and celebrate your hand at work in the world. In the name of Christ. Amen.