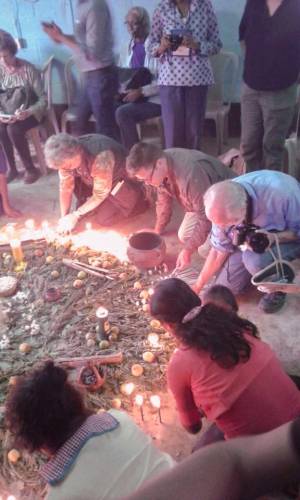 A group of Presbyterians from across the U.S. recently had a front row seat on the impact of corporate involvement on the environment and human rights in Central America. Approximately a dozen people took part in a two-week travel study seminar to Guatemala and Costa Rica to learn about extractive mining, the impact on rivers and streams and the daily struggles of residents who must sometimes choose between good health and providing for their families.

While in Guatemala, the group visited a half dozen mining communities and listened to residents talk about efforts to resist corporate expansion. Rick and Jo Randolph made the trip from Lenexa, Kansas.

“We learned the mines were discharging their water right into the watersheds of the community,” Rick Randolph said. “Water is highly polluted with arsenic, lead, cyanide and a number of heavy chemicals, and you could see kids walking around with chronic arsenic poisoning with the discoloration of the skin.”

Mary Smarr of Stone Mountain, Georgia, says Guatemalans are persistent in their fight against the mining industry, but it has created a lot of stress.

“One young woman we talked with said they are under pressure from people working in the mines to stop their actions,” she said. “Despite communities voting no to new mining activity, companies are still coming in and the government is still licensing them.” 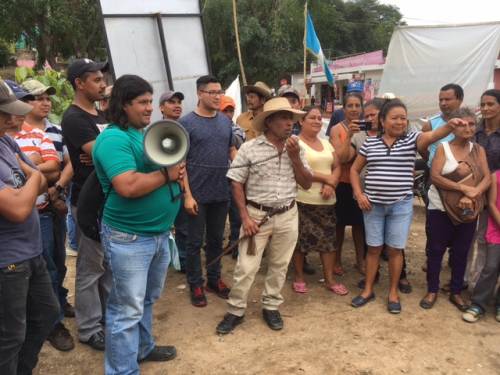 Rally at the peaceful resistance in Casillas, on the road to the El Escobal mine. (Photo by Carl Horton)

The group visited several mining resistance communities, including San Juan Bosco, Casillas and Santa Rosa. Casillas is the current site of a peaceful resistance blockade along the highway leading to the El Escobal mine. The blockade seeks to ensure that court-ordered suspension of mining activities is respected and that no mining-related vehicles pass through.

“When we go into the villages, it is the women who are on the front line of the resistance and pushing for the government and city officials to do better for the people, their children, their neighbors,” Jo Randolph said. “They are pushing the agenda both in Guatemala and Costa Rica.”

The group saw similar challenges in Costa Rica as they visited farms and talked with the people about the ongoing struggles with large corporations.

“Most of the small farms in the region have gone away, and the large plantations have popped up with promises of employment and economic growth,” said Carl Horton, coordinator for the Presbyterian Peacemaking Program. “But less than 1 percent of the people living in the locality are employed in the pineapple industry, and the community is not seeing many of the advantages promised to them by corporations.”

Three plants employ residents in the region — one for processing the pineapple, another for packaging and another that produces products like Gerber baby food.

“We learned the plantations are polluting the water with chemicals, fertilizers and pesticides that run off into their streams and evaporate into the air. Chemical-based mono-crop farming contaminates the soil and leaves the water unfit for consumption,” Horton said. “Households receive truck delivery of drinking water every two days. People take showers and wash their clothes in contaminated water, but they just can’t drink it. They told us they tried boiling it, but it’s not a problem they can boil away. It is surprising that these water protectors fight without the support of their communities. In many cases, they are actually ostracized by their neighbors, so it’s a battle.”

The group learned about reforestation efforts in both countries and met with church leaders about ongoing efforts to minister to indigenous communities.

Kathy Mitchell, a Native American from Chinle, Arizona, quickly developed a connection with the people in both Central American countries.

Ann Haspels, of Cortez, Colorado, says the seminar has left a long-lasting impact on her. “I think the entire experience has been tremendously and overwhelmingly intense and rich. As we share our stories and photos, I think we’ll continue to seek wisdom and try to find the best words and ways to describe what we’ve experienced.”

As your disciples, we pray, O God, for eyes to see, ears to hear, hearts to love, and arms to embrace those near and far who thirst for justice and mercy. Amen.