Getting back into the swing of things

Not among God’s ‘frozen chosen,’ ‘1001’ associate dances to express new life he’s been given 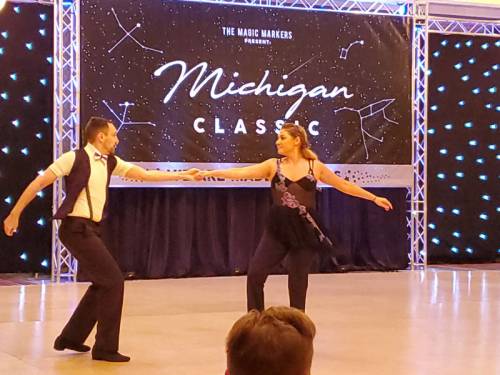 After he participated in worship and preached one day during the summer, 1001 New Worshiping Communities associate the Rev. Michael Gehrling danced.

In part, he danced because he could see the future again — a future made brighter through a (dance) step of faith.

“Their pastor, Sarah Lee, asked me to come because a lot of their folks enjoy dancing,” says Gehrling, “particularly those in the Filipino community.”

Gehrling, who dances with his instructor at pro-am events around the country, has won events in four cities. He also competes in amateur Jack and Jill events, where partners are drawn randomly. He’s moved up from the Jack and Jill novice division to the intermediate level.

“I’m at the bottom of that level, so I’ve got a lot of practicing to do,” he said.

In 2016, when Gehrling decided to take up dancing, he was buried in grief. His best friend, the Rev. Chris Brown, with whom he’d co-pastored the Upper Room in Pittsburgh, received a new pastoral call in Colorado. Then another good friend and roommate moved. That was followed by his mom dying unexpectedly — and a romantic relationship ending.

“It all happened at once, within two to three weeks,” said Gehrling.

With his life upside-down, he turned to a book written by Princeton Theological Seminary President the Rev. Dr. M. Craig Barnes, “When God Interrupts: Finding Life Through Unwanted Change.” As Gehrling read about Mary Magdalene clinging to the resurrected Jesus, he realized that like her, he was holding on.

“I wanted everything to go back to the way it was,” he said. “But resurrection means it’s going to be different — new resurrected life always means moving into something we haven’t experienced.” 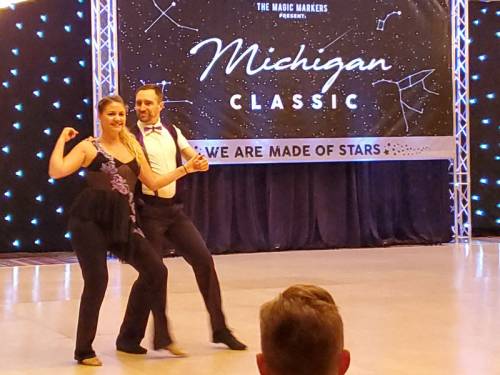 For the Rev. Michael Gehrling, “there’s a lot of risk and vulnerability” in competitive dancing, “which I think is part of the journey of discovering your true self.” (Contributed photo)

As Gehrling began to let go of wanting things to be the way they were, he began thinking that he wanted to do something new, something both social and physical. Dancing seemed to check all the boxes.

He’d been intrigued by dancing for some time, thanks to all those television reality shows. Plus, he’d taken theater arts classes in high school and college. Still, trying something new by stepping onto the dance floor at a local studio just a month after all that loss was awkward.

“It was pretty hard, going to that first one,” he recalled.

The second and third experiences were even harder. Emotionally raw, Gehrling felt exposed. But what he discovered was a wonderful group of people who were dancing for all kinds of different reasons. Suddenly, there were new people in his life, and he experienced something he never had before.

“You are creatively exploring with your partner what you can do with your bodies physically,” said Gehrling. “There’s a lot of risk and vulnerability in that, which I think is part of the journey of discovering your true self.”

Because he travels so much for 1001 Worshiping Communities and has a lot more practice to put in now that’s he’s moved from novice to intermediate, Gehrling often finds a local dance class in whatever city he’s in. Recently in Atlanta he walked into a studio where he’d never danced before, only to receive a welcome surprise. Immediately he spotted a couple of people he’d danced with at a competition in Washington, D.C.

It made him realize how much he has gained since he stepped onto the dance floor the first time, carrying the weight of all that grief.

“It’s been freeing,” he said. “I can see the future again, which I was having hard time seeing before dancing.”

Gehrling works with presbyteries and new worshiping communities in the Northeast region and also runs the 1001 Worshiping Communities assessment programs.

To view the work of the Discerning Missional Leadership program, go to vimeo.com/292967300.

God of all nations, we praise you for the ways you use our simple gifts for the good of the kingdom. Thank you for providing bridges between all people with your love. Give us strength and vision to live every day as children who love and serve the Heavenly Father. Amen.