Affordable housing is coming soon to the heart of Durham, North Carolina

Alliance of faith and civic leaders is confident that ‘Durham CAN’ 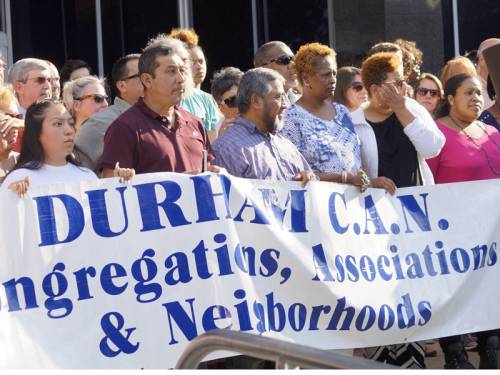 Durham CAN, an alliance of nearly 30 congregations, associations and neighborhoods, have spoken up about the critical need for affordable housing in their community. Their collective voices have been heard. (Photo provided by Durham CAN)

In Durham, North Carolina, downtown revitalization will soon get a collaborative kickstart through the construction of hundreds of units of affordable housing, which city and county officials agree is a growing need in the community.

What has been called a “landmark decision” and a “legacy” for the city and county of Durham owes much to the advocacy efforts of Durham CAN (Congregations, Associations and Neighborhoods), a nonprofit, nonpartisan, broad-based coalition of nearly 30 faith and civic organizations, including five large Presbyterian churches in Durham: Blacknall, Durham, Emanuel, First and Trinity Avenue.

For more than two decades, Durham CAN has focused its efforts on changing the conditions that prevent low- and moderate-income families from improving their circumstances. Organizing for access to affordable housing remains one of the coalition’s top priorities.

Durham CAN used its collective power to persuade various decision makers to use publicly owned land to generate housing for those in the community less privileged. The affordable housing revitalization is now an effort for the City of Durham, which provided 82 units at two acres of publicly owned land downtown; Durham County government, which provided two parcels of land on East Main Street to build 305 units; and the Durham Housing Authority, which exercised its right to acquire 20 acres of abandoned and vacant land in the historic Hayti District. Construction is expected to begin in late 2020 and hundreds of affordable housing units will be part of this mixed-use development.

“Durham is quickly becoming a city with high rise, highly priced apartments, which, in turn, is making it more difficult for those on limited incomes to find affordable housing,” said the Rev. Theodore E. Churn, executive presbyter/stated clerk for the Presbytery of New Hope. “This [affordable housing] is just one ministry that CAN has committed itself to in providing a more just community.” Durham CAN received the Presbytery of New Hope’s Passion-Driven Ministry Award in 2017. 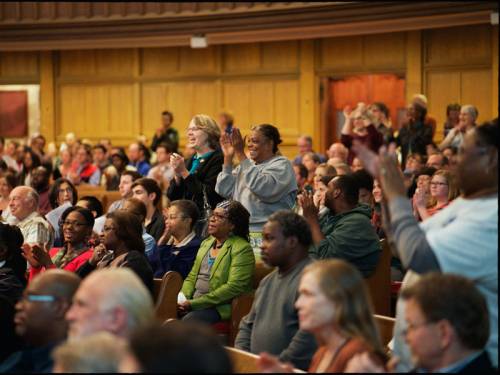 More than 600 Durham CAN leaders met to ensure county commissioners fulfill their commitments of affordable housing at 300 and 500 E. Main Street sites. (Photo provided by Durham CAN)

Durham CAN also has received a Congregation-Based Community Organizing (CBCO) grant (average $5,000) from the Presbyterian Hunger Program annually for three consecutive years. CBCO grant funds distributed by PHP are provided through a percentage of the Presbyterian Church U.S.A.’s One Great Hour of Sharing offering.

“CBCOs provide a vehicle for churches, schools, unions and nonprofit organizations to carry their concerns and values into public life, as they create policy and hold those in power accountable for their decisions,” said Andrew Kang Bartlett, associate for national hunger concerns, Presbyterian Hunger Program. Over the years, PHP has been able to provide some grant funding for most of the CBCOs at work nationwide, either in the startup phase or in their ongoing efforts with affordable housing and homelessness, Kang Barlett said.

“For the last 19 years CAN has organized successful campaigns in the areas of education, employment, health care, living wages, neighborhoods, opportunities for youth and services for immigrant families,” said Durham CAN development organizer Maria Calvopina. She added, “In addition to its successful affordable housing work, CAN’s impressive victories include boosting the wages of thousands of local workers employed by the city, the county, the public schools, Duke University and the Triangle Transit Authority; putting in place a coordinated provision of donated specialty care that benefits 3,000 low-wealth individuals every year; expanding the universal breakfast program to benefit 40,000 children in the Durham Public Schools; testing all children at elementary school level for lead poisoning; and organizing high school youth in Durham to win the hiring of three additional counselors in the three lowest performing schools.”

Durham CAN is an affiliate of the Industrial Areas Foundation (IAF), the nation’s first and largest alliance of faith and community-based organizations. CAN has one Iron Rule: Never do for others what they can do for themselves.

“Our primary goal is to develop local leadership and organized power in middle- and low- income communities to fight for social justice issues,” said Calvopina.

Linda Jacobsen, Board of Pensions
Lisa Jacobson, Office of the General Assembly

God of peace, thank you for being gentle, loving and compassionate, gently calling us to your wisdom. Help us to claim our true identity as your beloved, so that we might always live in your peace and love. Amen.