Caring for the Caregivers 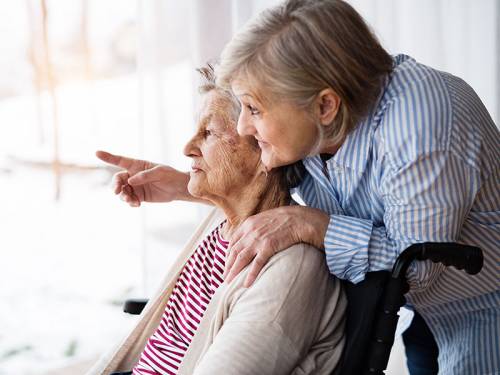 As the U.S. population grows older, more Americans than ever find themselves in a family caregiving role. Churches can be a source of support for those caring for loved ones. Getty Images

The Rev. Sharyl Dixon is now in her sixth year serving Kingston Presbyterian Church in Kingston, New Jersey. When she started serving the church — be it visiting the women’s Bible studies or shaking hands at the door after a service — Dixon realized that what she was witnessing, in different forms, was caregiving, whether it was for a spouse with dementia, ailing parents or children with special needs. Dixon realized there was a need to care for those offering care to others.

So, three years ago she created a monthly gathering on Saturday mornings for caregivers to get away for a few hours to simply check in, ask questions and connect. At one of the gatherings, Dixon read a poem by John O’Donohue called “For One Who Is Exhausted.”

Dixon says the people who gather monthly are in a season of life that is exhausting, and they don’t know when it will end. Of course, the other difficult piece is that “ending” most often means losing their loved one. Many, she adds, did not see the season coming and had no idea how hard caring for their loved ones would be.

“People took care of their family members in previous generations and they were exhausted, but they didn’t always have permission to gather and hear others’ stories and walk alongside one another in them,” she said.

At Kingston Presbyterian, in some months only one or two people attend the gathering. Every month Dixon’s secretary asks, “Should I put it back on the calendar?” And every month Dixon replies, “Yes, put it back.”

“I thought there was a need, and I thought it would address a real pain, but I had no idea how deeply this time would bless people — myself included,” Dixon said.

Kris Larson, a member of Southminster Presbyterian Church in Arlington Heights, Illinois, works as a business analyst for a local hospital. One Sunday after church she was talking to a couple and they realized there was a need in their congregation for a gathering of those providing care for others. So, they organized what became a monthly gathering at the church. 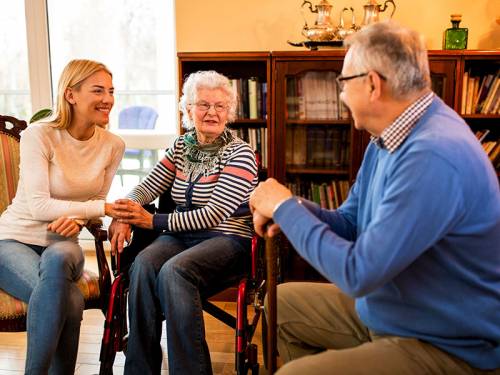 Initially they invited speakers such as nurses and other professionals to provide information for those caring for relatives. The meetings were well received and regularly attended by a small group from the church. But Larson admits she had hoped that it might become a group with more interaction among the members. Instead, it stayed in the presentation/information mode.

Larson and her husband were both working full time and caring for her in-laws. As her in-laws’ condition worsened, the couple began to be overwhelmed.

Looking back, Larson thinks there might be ways to make changes and perhaps have such a gathering again.

One idea she has to help meet this need is to have a list of “substitute caregivers” who would be available to sit with a loved one so that the primary caregiver can attend worship or simply have a break.

Sometimes caregivers would bring their family member with them to the meeting because they didn’t have anyone to stay with the individual while they were away.

“It was hard to have them in the room with us and to talk in front of them because often we were not sure what they might be cognizant of and did not want to say something that would offend them,” Larson said. “If we had had another room set up for them, with someone to be there, that would have helped.”

Though her in-laws have passed away and Larson is no longer in a direct caregiving role, it is still something she thinks about.

“This is near and dear to my heart because it is such a need,” she said.

Erin Dunigan, PC(USA) Ordained Evangelist living in Baja California, Mexico; Founder of  Not Church, a gathering of atheists and agnostics who wish to deepen their spiritual journey

Today’s Focus:  Caring for the Caregivers

Gracious, caregiving God, help us to be ready to care for each other through all the chapters of life. May we see your face in those for whom we are. Help us to remember to care for ourselves and trust that your grace will guide us. Amen.