The power of prayer walking 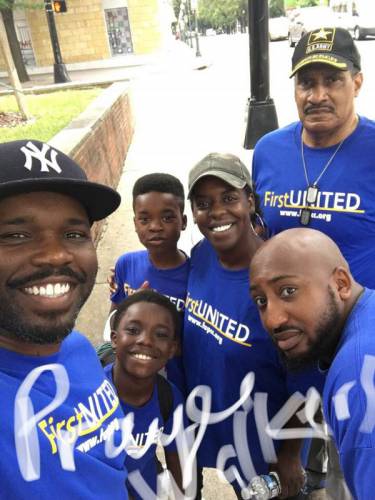 The Rev. Lorenzo Small, front left, says prayer walking is a “simple and effective” way to get out into the communty while learning to pray more. Courtesy of Lorenzo Small

The Rev. Lorenzo Small admits he had never heard of prayer walking until a pastor friend told him about it. So, he tried it. The prayer walk made such an impact on Small for being “very simple and yet very effective” that wherever the pastor goes, prayer walking goes with him.

During his time as pastor at Pleasant Ridge Presbyterian Church in Lancaster, South Carolina, the prayer walks would be mapped out, targeting specific communities. The church members would spend about an hour walking and praying — and picking up trash.

“We were in a suburban community where there were not too many people on the streets, so the prayer walks became service-oriented as well,” Small said.

Now serving in an urban setting as pastor of First United Presbyterian Church in Charlotte, North Carolina, Small says the walks are more people-focused — no picking up trash.

The deacons are tasked with the prayer walks, although anyone from the congregation can join the once-a-month Saturday morning prayer mission. Participants don church T- shirts and divide into groups of four. They pick an area of Charlotte to walk, and those on the street are asked — in “an inviting way,” Small says — “Can we pray for you today?”

Some people say yes, some are surprised and some say no. That’s OK, Small says. “They can escape our presence, but they can’t escape our prayers,” he said. When they’re not praying with people, the walkers stop in front of Charlotte’s businesses and pray.

While prayer walking can have an impact on the community, Small has also seen a transformation within his congregation.

“I admit this was an outside-the-box idea. Presbyterians can find it intimidating sharing their faith on the street, let alone praying in public,” Small said. But Small, a former pharmaceutical salesman, modeled for his members how cold-calling was done.

“I would often approach people and do the praying. The more it was done, the more they grew comfortable with it. It’s about how people can grow in prayer,” Small said, adding that his congregation also enjoys the time of fellowship together.

Small’s advice to churches thinking about prayer walking is to keep it simple. Keep groups small, no more than four people — less intimidating for those being approached for prayer, Small says — and keep the walk to an hour. And never forget the most important thing.

“This is us praying for the community God has called us to serve,” Small said.

Gracious and loving God, grant that our hearts may be filled with joy for the gifts given to us. May our voices join the chorus of the saints in all ages who declare the wonders of your blessings. Amen.