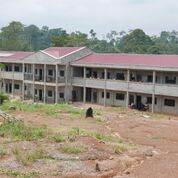 A classroom block has been built at Presbyterian Comprehensive Secondary School (PCSS) Mfou near Yaounde.

“At a time when fear and uncertainty are looming in the air, at a time when emotions have overtaken reason, at a time when the sacredness of human life has been defiled, at a time when we are creating more enemies than friends, at a time when division seems to be destroying the unity of our people, and at a time when we do not seem to trust each other, we are here again to remind all Presbyterians and the people of Cameroon of our collective responsibility and role as a Church and as a people in these trying moments of our nation and history.” Thus, starts the Oct. 10, 2017 official statement of the Presbyterian Church in Cameroon (PCC) concerning the crisis in Cameroon, often referred to as the Anglophone Crisis.

The crisis continues to disrupt lives, particularly among those living in the English-speaking Northwest and Southwest regions of Cameroon. What started as peaceful protests against the placing of non-English-speaking judges in courts and teachers in the schools within the English-speaking regions turned into a militant secessionist movement after a deadly crackdown. Countless civilians, militants and security forces have been killed in the past two years. Most schools remain closed for fear of kidnapping of children and teachers. Hospitals have been attacked. Transportation, farming and businesses have been disrupted. 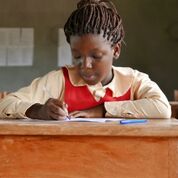 A student takes an entrance exam for PCSS Mfou.

The Presbyterian Church in Cameroon (PCC) strives to be a meaningful presence in the lives of the population in crisis.  They are particularly concerned about the short- and long-term impact of having a vast portion of the children and youth unable to attend school. There has already been noted an increase in teen pregnancies and with that the risk of sexually transmitted diseases. Boys are at higher risk of being recruited or forced into militia or being arrested by security forces. Even before the kidnappings last year forced the closure of still more Presbyterian schools, the PCC took the bold step of starting a new school located near in a safe part of the country, near the capitol. Presbyterian World Mission contributes to the PCC’s Back-to-School initiative, a strategy aimed at facilitating access to basic education for thousands of children affected by Anglophone conflict and poverty.

Lord of Peace, please move the hearts of militia and security forces so that they will each commit to allowing all children to attend school without fear for their safety.  May all stakeholders in this conflict respect life and pursue a just and peaceful resolution to this crisis. Please give courage and strength to your church in Cameroon so that it may be a living witness to your love and grace. Amen.