Her designs are on opening young hearts 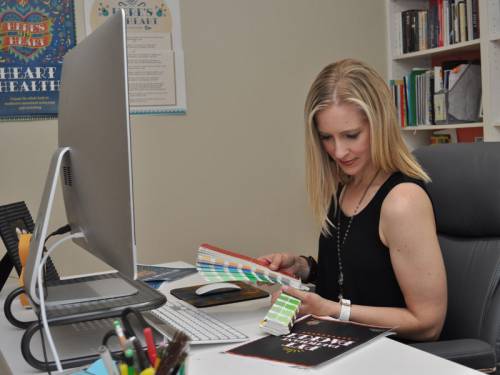 Presbyterian Youth Triennium’s designer, Ashley Rash, says that when she’s creating something beautiful, God’s image is at work within her. (Photo by Amy Moser)

When she agreed to be the graphic designer for Presbyterian Youth Triennium 2019, Ashley Rash didn’t know that 90 percent of the work would be in June. “It’s been crazy,” she says. “But, quite honestly, it’s also been a lot of fun.”

When the logo was created by PYT veteran designer Beth Thomas, PYT Director Gina Yeager-Buckley wanted the style to resemble Mexican folk art and to have bright colors and shapes with the Mexican sacred heart.

“The original ideas for the heart design came from my experience with young people,” said Yeager-Buckley. “The protection they put around themselves — thus the spikes around the heart.”

“Most of the symbols in the heart are really just decorative,” said Thomas. “But there are two hands at the top holding the flame, the Holy Spirit.”

And that, according to Yeager-Buckley, is a modern reflection of Reformed theologian John Calvin’s image of a hand holding a heart.

“God’s saying, ‘Here’s my heart,’ ” she said, “and humans are saying, ‘Here’s my heart.’ ” For Thomas, who recently retired, faith was an important part of creating “Here’s my Heart.” Because the phrase comes from the hymn “Come, Thou Fount of Every Blessing,” Thomas frequently thought about the lyrics and melody while designing the logo.

When Thomas handed off her logo to Rash, she knew she was getting a talented graphic designer. Years before they’d worked together at the same advertising agency.  But she also knew that Rash had a background in youth ministry and that her Christian faith would find its way into her designs.

One of the first things Rash did after seeing the logo was to familiarize herself more with Mexican folk art. Researching Mexican culture, she began to realize at a deeper level and to celebrate how the heart represents love for others and God’s divine love for humanity.

“I wanted to take that idea,” she said, “but instead of giving our hearts to someone, to offer them to God who is communicating undying love for us.”

Because “Here’s my Heart” had so many nuances and colors, Rash says it was easy to extrapolate the initial logo into multiple design pieces and to differentiate them so that they all have their own style.

“There’s the heart, with spikes around it, the circles in a beaded line that create this lovely scalloped look,” she said.

One of the banners Rash created took advantage of that look. It has scalloped edges frequently seen at Mexican celebrations, where decorations hang from a ceiling.

Excited about coming to her first Triennium, Rash led an interest group worship and had a booth at the PYT exhibit hall, where she encouraged Presbyterian youth to explore their passion for the arts.

“God gave each of us gifts,” she said. “God is an artist who has created so many beautiful things in the world — and everything in the universe works together perfectly.”

When Rash is creating something beautiful, she said she feels that God’s image is at work in her.

“Technically I’m quoting from the Westminster Catechism here — it’s the one I know — but we are to glorify God and enjoy God forever,” she said.

Dear God, inspire us to “set aflame” the story and teachings of your Son, Jesus Christ. May we all feel the energy and enthusiasm of youth as we spread your word. Amen.