Military chaplains: providing hope in the time of need

In peace and at war, making the holy present to service men and women 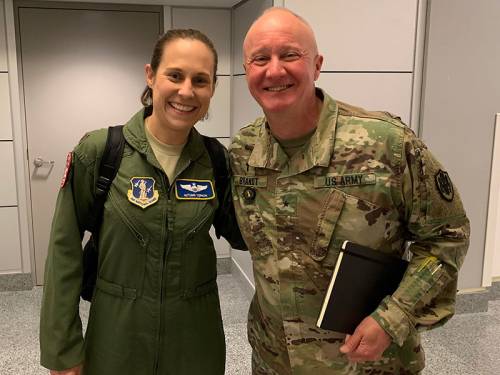 It was an honor like no other for Army Brig. Gen. Kenneth “Ed” Brandt. For the past 30 years, Brandt, an ordained PC(USA) pastor, has been serving as a military chaplain, providing enlisted men and women with a sacred space to make sense of out of a sometimes-senseless world.

Now here he was, standing at the podium of Arlington Memorial Amphitheater outside of Washington, D.C. Morning’s first rays strengthened, illuminating Arlington National Cemetery’s sea of white crosses, as if to affirm the message of resurrection that Brandt would deliver at the 2019 annual Easter sunrise service.

“The best part of waking up today on this Easter morn is forgiveness in our cup, hope in our heart and new life for our souls,” Brandt said to the more than 2,000 gathered. His words were more than just words — they captured his calling as a military chaplain.

“When someone seeks out a chaplain, it is because they know what they tell us is confidential. They have a space to talk about whatever the issue may be — family, work, substance abuse,” Brandt said.

Brandt currently serves as director of the Office of the Joint Chaplain, National Guard Bureau, and U.S. Army deputy chief of chaplains. He deployed to Iraq in 2008–09 and served at the National Guard Bureau and then as the state chaplain of Delaware before accepting his current position.

An Army National Guard report for the first quarter of 2018 revealed just how much chaplains are there for servicepeople, with 52,017 counseling sessions, 8,642 worship services, 1,181 military funerals and 1,920 hospital visits.

Capt. Robert Rose, a self-described lifelong Presbyterian who grew up on the West Coast and now serves as a deputy wing chaplain at Offutt Air Force Base in Nebraska, says the simplest way he would describe the job of a military chaplain for someone not familiar with chaplaincy is that he is a pastor for the men and women of the units he works with. But Rose admits that it gets much more complicated. 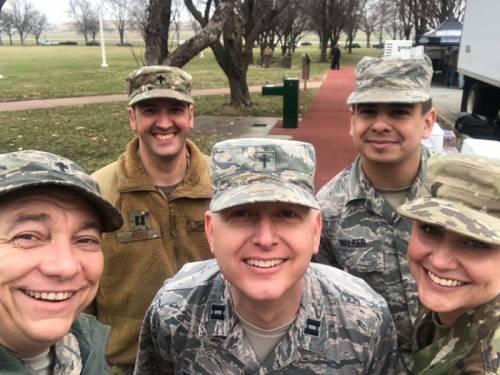 Capt. Robert Rose, back row, left, who once described himself as a pacifist, now serves as a deputy wing chaplain in Nebraska. Rose sees being a chaplain as being “a visible reminder of the holy.” Courtesy of Robert Rose

“One unique aspect of our job is that military chaplains are the subject matter experts for religious freedom questions,” Rose said. “So, while I often provide pastoral care and counseling, occasionally preach and lead worship, I also advise leaders on when they might be giving preference to one religious group or another. Or I might help leadership understand a military member’s request for accommodation of her or his religious practices.”

Brandt agrees, noting that today’s service men and women come with many different faith beliefs — and even no beliefs. As a chaplain, Brandt says that he “has to make sure that people have the freedom to practice or not practice their faith at all.”

If pushed to name the key role of a chaplain, Rose would say it is “providing a tangible reminder that there is a spiritual aspect to life.”

“The Air Force used to say the chaplain is the ‘visible reminder of the holy.’ While I’m walking around in the units, I can be that reminder that there is meaning and purpose to life,” Rose said.

In fact, Rose says the struggles he sees the most in the military are marital- or work-related. And the questions of faith are not as profound as one might think.

“I always want the answer to what questions of faith does a chaplain get to be something like ‘Is war just?’ or ‘Where is God when it hurts?’ Most of the time, the questions or struggles I see are the same ones I found in my civilian ministry. People seem to ask, ‘Where is God in my everyday challenge?’ ” Rose said.

But despite all of the challenges, Rose, like many called to military chaplaincy, sees the many blessings as well. Among the greatest gift for Rose is “to see someone who has faced serious challenges — be it relationships falling apart, a struggle in the office or post-traumatic stress — and see them achieve some level of healing.

Donna Frischknecht Jackson, Editor of Presbyterians Today. Rick Jones, Director of Communications for the Office of the General Assembly of the Presbyterian Church (U.S.A.), contributed to this story.

Lord, Prince of Peace, hasten the day when swords are beaten to plowshares and your peaceful reign is complete. Until then, gird our chaplains with your love and strength as they care for all in uniform and their families. Amen.