Practicing forgiveness in a judgmental world

Where’s the hope if all have sinned?

Early in the morning he came again to the temple. … The scribes and the Pharisees brought a woman who had been caught in adultery; and making her stand before all of them, they said to him, “Teacher, this woman was caught in the very act of committing adultery. Now in the law Moses commanded us to stone such women. Now what do you say?”… Jesus … straightened up and said to them, “Let anyone among you who is without sin be the first to throw a stone at her.” … When they heard it, they went away, one by one, beginning with the elders; … Jesus straightened up and said to her, “Woman, where are they? Has no one condemned you?” She said, “No one, sir.” And Jesus said, “Neither do I condemn you. Go your way, and from now on do not sin again.” — John 8:2–11 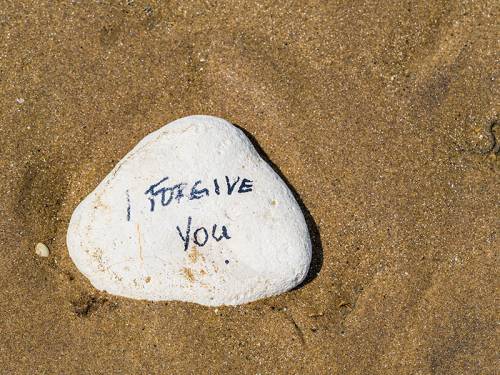 When I was a pastor in Montgomery, Alabama, I was in a meeting with several community leaders and civil rights advocates talking about justice issues in the city and the state. We were gathered in one of the Sunday school rooms of a small Baptist church. Early in the meeting, I looked up and noticed a small poster on the wall that read: “What if God released his tapes on you?”

I almost laughed out loud. It was 1974, and I was struck by the link of this warning to Sunday schoolers with the national crisis that was unfolding around the tapes recorded by President Richard Nixon, who was then on the road to impeachment.

It is 2019 and we are in a daunting time in our nation, surrounded by disclosures and accusations of racism, sexual harassment and rape. With every new filing of a candidate for the presidency, there is an adverse advocacy group whose first step is to begin the search for whatever dirt they can dig up against the person.

Jesus’ challenge to the woman’s accusers presents those of us who are Christians with a special challenge. That challenge not only involves the age-old question “What is the truth?” But also, if it is true, how should we respond? Even where there are credible misdeeds, as Christians we face a thorny question: What does forgiveness require?

What is the Christian equivalent of Jesus’ command, “Go and sin no more,” where there are lapses of behavior or character? Do some offenses deserve a social or political “death penalty” that closes down someone’s future for good? How do we — sinners all — offer words of both judgment and hope in such cases and others we face on a weekly basis?

There are no easy answers. One certain thing is that all of us, when we are led to pass judgment on others, must recognize our own failures. We must face with humility God’s declaration that “all have sinned and fallen short of the glory of God.” There will be those among us who are not moved by such admonitions and continue to pile up words of slander and judgment against their perceived enemies.

Still, for all who follow Jesus, there is the reminder that none of us is pure or righteous. In the end, we must cry out to God for divine mercy to cover our own failures and misjudgments.

Vernon S. Broyles III, a Volunteer for Public Witness in the PC(USA)’s Office of the General Assembly

For bread that nourishes our bodies, we give you thanks, O God. For your Bread of Life to feed our souls, we pray. Strengthen us all for the tasks you have given us. Remind us that even what we believe to be a meager offering can satisfy the deepest hunger in others — and in our lives too. Amen.