Columbia Seminary education helped teach entrepreneur to develop products people need, rather than those he thought they needed 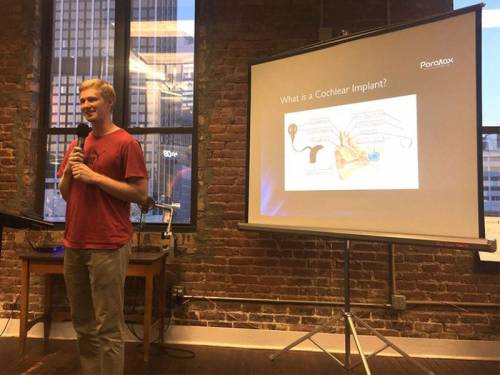 When Thomas Hampton came to Columbia Theological Seminary in the fall of 2016, it might have seemed like a huge departure from his previous experience as an engineering student at Case Western Reserve University. He is, after all, among a select group of neural electrical engineers who can build what is commonly known as cochlear implants.

Cochlear implants are a controversial technology that enable a person who is deaf to hear. Many in the deaf communities of the United States see value in their culture developed around being deaf. In this view, deafness is a difference in human experience, rather than a disability or disease. However, many countries around the world have neither the developed deaf culture of the United States, nor affordable access to technologies like cochlear implants. This is where Hampton seeks to serve a variety of needs through dialogue with these various communities and through building an innovative product.

Hampton is using his education at Columbia Seminary to learn how to minister among the deaf and navigate these cultural tensions. And often these tensions intersect with other cultural divides such as ethnicity and wealth.

Hampton has created a new company called Parallax to create discussion and solutions around these sorts of issues. Parallax is “the effect whereby the position or direction of an object appears to differ when viewed from different positions.” It is how we acquire depth perception in our vision using both eyes.

In addition, Hampton is creating new inventions that will help people who are deaf. Most significantly, he patented a new solution last fall for his version of a cochlear implant. Instead of needing its own microphone and sound processor, his version would utilize the ones many people carry around in their pocket every day — in their cellphone. Current costs of a cochlear implant are now around $25,000. Hampton’s goal is to create a cell phone app that would make the cochlear implant just a few hundred dollars. He describes the design as “a generic drug price decrease, with a redesign for global connection.”

“I was contacted by an audiologist in Lima, Peru,” Hampton said. “He is working with a family there who desperately wants a less expensive solution. My goal is to give people options, so that they don’t have to make decisions purely based on a financial limit.”

Hampton continues his engineering work and research alongside his M.Div. studies. In each course, he integrates what he has learned previously to build his knowledge for ministering in this space. Even in his engineering work, he wants to build solutions to match needs identified by deaf communities.

Last spring, he took a course titled “Human Difference, Divine Justice, and Worship” with Dr. Rebecca Spurrier, who did much of her doctoral work in disability studies as it relates to worship. As part of his contextual education course, Hampton participated in a program called “The Hatch” at CenterForm in downtown Atlanta. The Hatch serves as “an early stage social innovation accelerator” that develops ideas to make a social impact. Co-founders John and Katheryn Heinz say that this 10-week accelerator program helps people “identify what works and what doesn’t and why.”

“The Hatch accelerator taught me about humility in predicting what other people want instead of assuming what I think would be best for them” said Hampton. “In business terms, I view finding a fit between a product and a market as a method for systematically testing empathy and modifying my thoughts. There are obvious parallels in all areas of effective ministry.”

In addition to completing his studies at Columbia Seminary, Hampton is now completing a doctoral degree at The Global Center for Advanced Studies (GCAS) in Dublin, Ireland. After graduation, he will begin a second doctorate in Intercultural Studies with a focus in Global Development at Asbury Theological Seminary this fall.

For more information about the Parallax Hearing Company, visit parallaxhearing.com. To learn more about CenterForm and The Hatch, go to centerform.org.